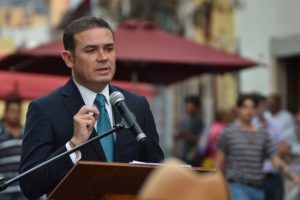 Mario Alejandro Navarro Saldaña, was born in Monterrey, NL. He has lived since he was very young in Guanajuato, capital city of the state of the same name, in central Mexico. He comes from a family of merchants in the tourism sector. The life of Navarro Saldaña, aged 42, can be divided into two moments: the “leading” businessman and the politician, with a “community-development approach”. He holds a degree in Business Administration (LAE) from the Universidad del Prado in Mexico City (CdMx) and several diplomas in commerce and politics.

Initiated very early to the tourism sector, his professional life as an entrepreneur is inspired by that of his family: hotels, gastronomy and museology; as well as projects and construction. As a recognized young entrepreneur, he developed a special affection for his city, which resulted in local and innovating actions with a strong social impact. His dedication, even to the point of altruism, included work as fire and rescue (1995-1997). He has also been president of the Rotary Club of Guanajuato (2006-2008), founding member of “Corazón por Guanajuato CC” (2010), founding president of “Guanajuato somos Todos” (2010), honorary councillor of the Council of state tourism of Guanajuato State (2006-2012) and two-time secretary of the Guanajuato Hotels and Motels Associa-tion (2010-2015). He was the manager of hotels Valenciana and Posada San Francisco (2011) and also explored the gastronomy as manager of the restaurant “Tierra Adentro”, a gastronomic center in Guanajuato. He was also director of the Museo Casa de los Lamentos (2011) and partner of Proyectos y Obras Civiles S.C., an office offering real estate construction services. 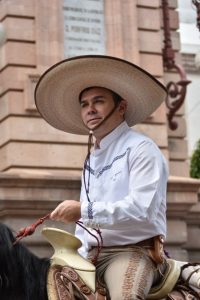 In the public service and in politics, he was director-general of the economic development of the government of the municipality of Guanajuato (2006-2009). In 2012, he occupied for the first time the presidency of the municipality, having not attained the majority. He is a member of the National Action Party (PAN) and has been chairman of his party’s municipal executive committee (2013-2014). He was a local deputy and chairman of the Guanajuato State Congress (2015-2018). In 2018, he won the election as mayor of Guanajuato for the period 2018-2021.

The work philosophy that led to his success relies on two pillars: the daily work effort and social responsibility; the second is in his vocation of community service and in the human commitment that society demands. Both with a great sense of family; he has great respect for his family and he gives a special place to his wife and two children. With these ideals, he enters politics and the public service as a winner. Mario Alejandro is an entrepreneurial mayor and has a very clear and humanitarian political mission: “Make Guanajuato an internationally recognized tourist destination with a great impact, taking advantage of history to consolidate its vocation and its strengths, a mission that is part of the major economic and cultural axes of today’s world heritage cities.”

1. What has been the impact of the nomination of your city on the World Heritage List?

The impacts were very positive for this city registered in 1988, and we succeeded in ensuring that the public space benefits from continuous recognition, which resulted in actions, decisions and results that citizens identify as the world’s cultural heritage.

Among the hundreds of Mexico’s sites, cities and heritage monuments, ten cities are declared UNESCO World Heritage sites, including two in the state of Guanajuato. This distinction of UNESCO commits the people of Guanajuato to preserve together a property that belongs to them as a whole, but which is also a jewel for the entire world. We work daily for its maintenance and conservation. In this sense, we organize fairs, cultural weeks and festivals, as well as partnerships and ad hoc interinstitutional agreements, in order to combine efforts to maintain the property in good condition. We guarantee that visitors will be able to admire the city’s environment, its adjacent mines and the residential, public and urban architecture that gives our city a historical context. We are constantly challenged and the people of Guanajuato appreciate all the efforts made.

2. In your opinion, what is the vital role of a mayor when a city has been inscribed on the World Heritage List?

“I am convinced that when society decides to participate actively, it positively transforms the environment and we are moving toward a better future.” This has been my philosophy as Guanajuato’s mayor.

Guanajuato Capital is an open city, which commits us as mayors to lead conservation processes to make the city a cultural and historical space recognised constantly, and preserved every day. We want visitors, whether tourists or business people, to be able to see in this city a unique place and get involved simultaneously in the daily life of Guanajuato. This is how we all converge harmoniously in this heritage space. Since assuming the municipal presidency in October 2018, we have consistently promoted projects that aim to achieve remarkable results in the field of World Heritage conservation, which distinguish themselves in the national and global environment.

3. Concretely, what have been your actions toward the projection and enhancement of your heritage?

With regard to heritage preservation, we have signed an agreement with the National Institute of Anthropology and History (INAH), a unique legal instrument, which establishes actions with the city, such as technical advice for the responsible management of heritage property conservation engineering and architecture, based on specific rules, in order to preserve the urban environment and buildings in UNESCO recognized space. The INAH catalogue reflects this sum of institutional efforts: Guanajuato Capital owns 13% of the catalogued assets in the State.

With regard to the value we attach to heritage, we have organized forums and conferences on the scientific and technical dissemination of the city’s artistic, architectural and historical heritage. In addition, editorials were published in electronic books and physical books about the tradition and history of Guanajuato Capital. We have organised international festivals, such as the Organ, to promote culture in the city and contribute greatly to the heritage environment we have. Other traditional festivals are the Day of the Dead and the first festival commemorating the 277 years of the granting of the “Title of the City of Guanajuato by the Royal Edict of 1741” and the 30 years of the Declaration of Cultural Heritage of the humanity, awarded in 1988 by UNESCO. These are very important and very popular events within the community.

Such actions reveal that we are engaged in constant work for the tangible and intangible heritage of Guanajuato Capital.

4. Do you hold special events to enhance your city’s heritage?

Yes, our government program (2018-2021) contains actions aimed at preserving the urban environment of the first place in the city. We have also developed activities that improve the processes of municipal services and, for the first time, the government reference program contains two plans: a “Strategic Tourism” to identify the talents and vocation that exist in Guanajuato Capital and thus consolidate tourist attraction and improve the quality of life of the people of Guanajuato and; another, the “Management of the Historic Center“, in order to maintain and preserve the 833 listed buildings and maintain their state. Both are contained in the government’s program with actions and expected results. Cultural activities are also organized at festivals, forums and fairs that reflect a better city.

At Guanajuato Capital, aware of the importance of the conservation, promotion and preservation of the artistic, mining, architectural and historical heritage of our city, we are conducting a series of actions that allow citizens to enjoy a tangible and intangible heritage of which we are responsible, thanks to a government that wishes to make the new generations of Mexicans benefit from the priceless treasures of our city.

5. In your opinion, what makes your city such a special place?

Guanajuato is a city where I have lived for most of my life and I witnessed its evolution and transformation. It is a city that is distinguished by its walls, which protect the mining works still to this day – the industrial economic life of Guanajuato continues indeed to indicate excellent figures for its GDP: it is about the fourth-largest activity and contributes 4.2% of gross domestic product (GDP), and 13.3% and 22.1% of national GDP are already in trade and services. Globally, Mexico is Latin America’s premier destination for investment in mineral exploration. Guanajuato is the largest producer of silver and is among the top 10 producers of gold and copper; occupying the eighth national spot in the production of gold and silver. In the State of Guanajuato, INAH has 6,537 properties, of which 13% belong to the municipality, 6% more than San Miguel de Allende, the second heritage declared by UNESCO in 2016.

It is definitely a city steeped in history, buildings and rich architecture, which shelters the voices of the past in its stones, thus creating a unique living space where the community develops harmoniously in the streets and squares. These places are decorated by the silhouettes of the mountains that surround them, thus preserving the economic, cultural and urban life. Inhabitants transform every day of their city into a charm of food, alleys and monuments which testify of their richness for the world. It is the capital of Guanajuato.

6. Guanajuato celebrated in 2018 the 30th anniversary of its inscription on the World Heritage List. What have been the impacts of this recognition for Guanajuato over the years? What has changed in your city in 30 years? 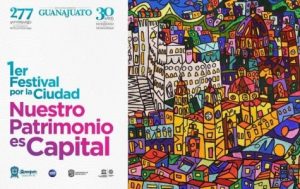 On December 9, 2018, took place the first festival “Our Heritage is Capital” to commemorate the 30th anniversary of its declaration by UNESCO and the 277 years of the title of the city, as well as the surrender of the coat-of-arms in Guanajuato. During this first festival, a cultural program was prepared to make the city known to the people of Guanajuato and visitors, for its cultural, historical and gastronomic treasures.

During this first festival, a collaboration agreement was signed with INAH to establish policies and guidelines to protect, preserve, restore and enhance the historical heritage of the city of Guanajuato. Thus, the INAH offers technical and legal advice to the municipality for the proper application of the law on federal monuments.

In thirty years, the city has changed a lot, some social and economic lags have been overcome, economic life has been strengthened and the tourist destination improved, but that is not enough, because the contrasts are high. This government I lead is, therefore, taking unprecedented action to preserve the heritage property of all and, within it, its proper management and conservation, through work programs of management and conservation of the architecture of the urban environment.

The city is a challenge, I repeat, it is a task and an experience made of visions and actions. Our ongoing work is difficult but it aims to create a better city, a quiet, safe city, with quality municipal services, while planning actions to preserve our heritage, buildings, history and culture. Guanajuato Capital belongs to all and we must keep it as a historical product of global value.

Information and credits from: