The 15th World Congress of the OWHC

The 15th World Congress of the Organization of World Heritage Cities (OWHC) took place in the city of Krakow, Poland, from June 2 to June 5, 2019, and was a resounding success. Following is a  summary of the event.

In addition, many participants attended the various workshops and events proposed in the programming parallel to the Congress:

The Congress one day at a time

On Saturday evening, Congress participants already present in Krakow were warmly welcomed at City Hall in Krakow for a networking cocktail reception. It was an opportunity for many to greet colleagues from the four corners of the world for the first time since the OWHC World Congress in Gyeongju in 2017. For others, this was their first contact with the OWHC and its members. To launch the festivities, representatives from the city of Krakow and members of the Congress Steering Committee offered a warm word of welcome to the participants.

The Heritage and OWHC Cities Parade departed from the Barbican at 6.00 pm. Full of colour and music, it was a joyful celebration of local traditions. The parade was led by the figure of Lajkonik – a true symbol of Krakow, followed by his joyful retinue, accompanied by the grotesque Mlaskoty. The farther part of the parade brought together the people of the city celebrating in the streets. Among the performances of acrobats, jugglers and stilts, were the Krakow residents dressed in traditional folk costumes. The parade ended on the Main Square, which marked the official start of the opening ceremony. 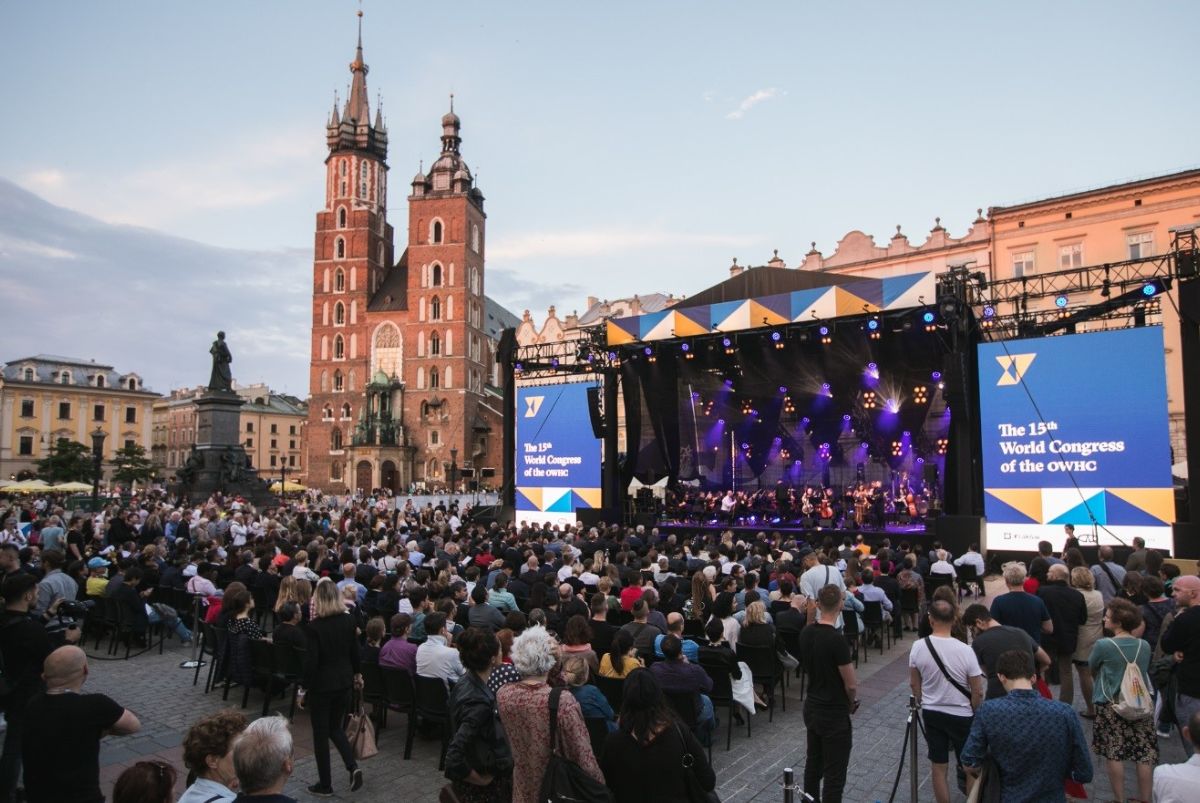 The opening words of welcome were offered by Jerzy Muzyk, Deputy Mayor of Krakow, followed by speeches by Régis Labaume, Mayor of Québec and President of the OWHC from 2017 to 2019, Fergus T. Maclaren, ICOMOS representative and President of the International Committee on Cultural Tourism, and Dr. Jyoti Hosagrahar, Deputy Director of the UNESCO World Heritage Centre. To conclude, OWHC Secretary General Denis Ricard took the floor during this prestigious event to reveal the name of the winner of the Jean-Paul-L’Allier Prize for Heritage. Saint-Petersburg, Russia, won the award for its cultural and industrial heritage sites re-development project.

The Congress’ opening ceremony was inspired by multicultural music traditions and relations of Central and Eastern Europe. The programme, entitled Towards the Sources, was open to all Krakovians and presented for the very first time in the surroundings of one of Europe’s most beautiful central squares. The two-part music journey representing unique Polish and Central European etno and world music traditions featured a medley of traditional and contemporary arrangements performed by artists from across Europe alongside the local Sinfonietta Cracovia orchestra. The concert’s second part presented a traditional dance where the performing leading bands of the Polish etno scene gave to the audience a wonderful and unforgettable moment.

To wind up the celebration, the participants attended a reception at the Gallery of 19th Century Polish Art in the Cloth Hall. Needless to say, the OWHC, its members, the local community and the cultural heritage of Krakow were highlighted during this ceremony.

Once again, OWHC cities were at the heart of debates on the scientific theme of “Heritage and Tourism: Local communities and visitors – sharing responsibilities”. The day began with a welcoming address by Professor Jacek Purchla, Chair of the Steering Committee, and the keynote speech by Professor Francesc Muñoz, Professor of urban geography at the Autonomous University of Barcelona. Mr. Doug Lansky, tourism development thought leader, was on hand throughout the day to facilitate discussions. 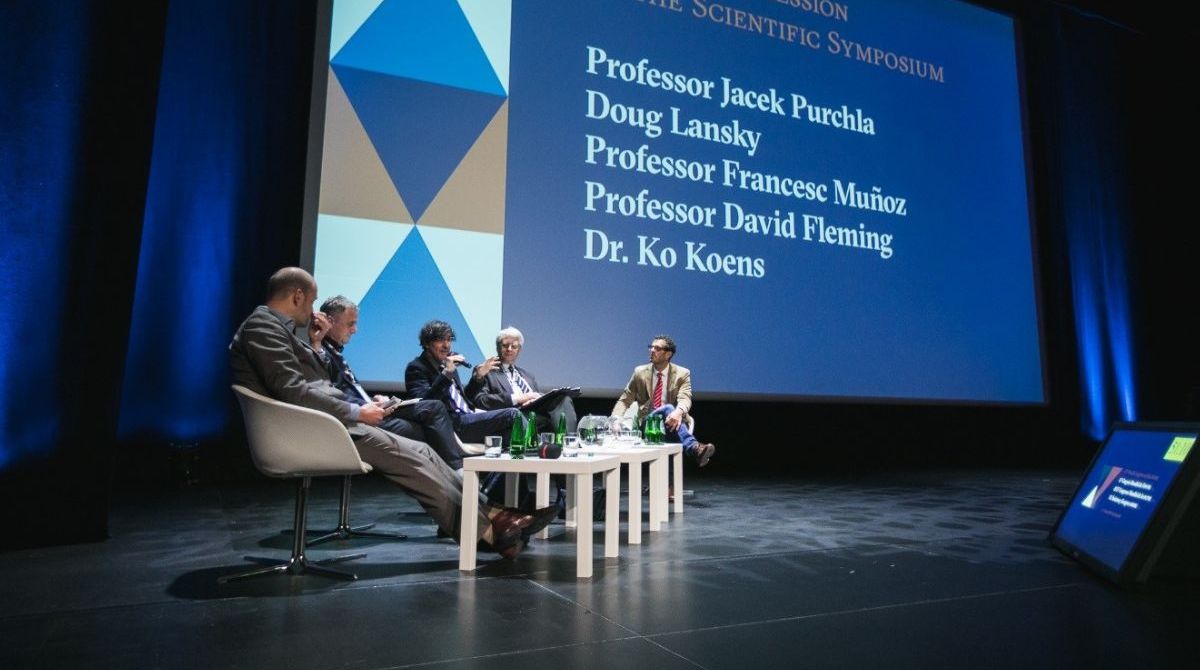 June 3rd ended with the announcement of the winners of the International Video Production Competition under the theme of  “If you had one day in a World Heritage City…” Congratulations, once again, to Valeria Sindimirova (city of Kazan, Russia), winner in the age 14 to 17 category and Nihad Nebili (city of Icherisheher, Azerbaijan), winner in the age 18 to 21 category. The results may be found HERE.

A very busy day of capital importance! Tuesday, June 4 started with the presentation of 15 nominations for the 2019-2021 Board of Directors and three candidacies for the 2021 World Congress host city. The quality and number of presentations mirrored our cities’ great interest in becoming an integral part of daily life at the OWHC. The results of the vote are presented by alphabetical order HERE, and were announced during the evening dinner. 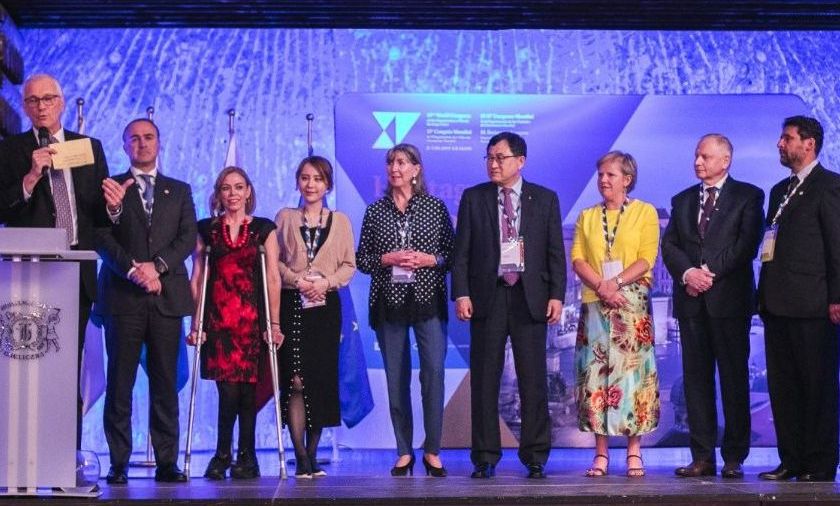 During the session closing the Scientific Symposium, experts and guest speakers were invited to comment on the interventions of the preceding day. It was also an occasion for Jorge Ortega González, Director General of the National Association of Mexican World Heritage Cities, to present the results of a very enlightening study on sustainable tourism in world heritage cities. The results may be found HERE.

Dr. Alexey Mikhaylov from St. Petersburg then presented the project awarded the Jean-Paul-L’Allier Prize for Heritage. The city of St. Petersburg has been awarded for its ambitious project of restoration and reuse of old industrial buildings in the historic center and its adjacent neighborhoods. This large-scale intervention was also carried out in partnership with the local communities and had a positive impact on the economic, social and cultural levels.

The morning ended with a session on OWHC activities. Using an interactive presentation, the team at the General Secretariat gathered ideas and suggestions to continue to offer top-quality programs to OWHC members in years to come. 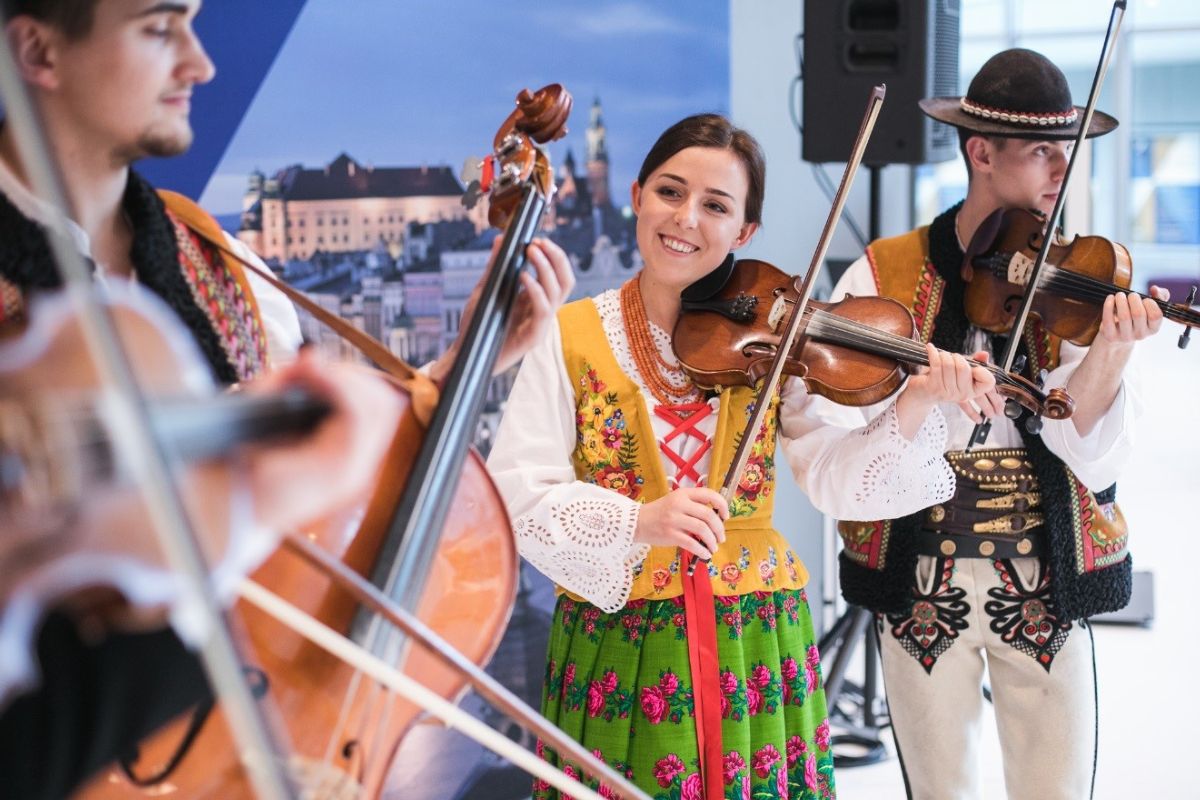 The afternoon was devoted to regional meetings where several cities met, exchanged and made decisions regarding projects of interest to them. Moreover, several themes were proposed for the 2021 World Congress. We will announce the theme chosen by the members shortly. Stay tuned! 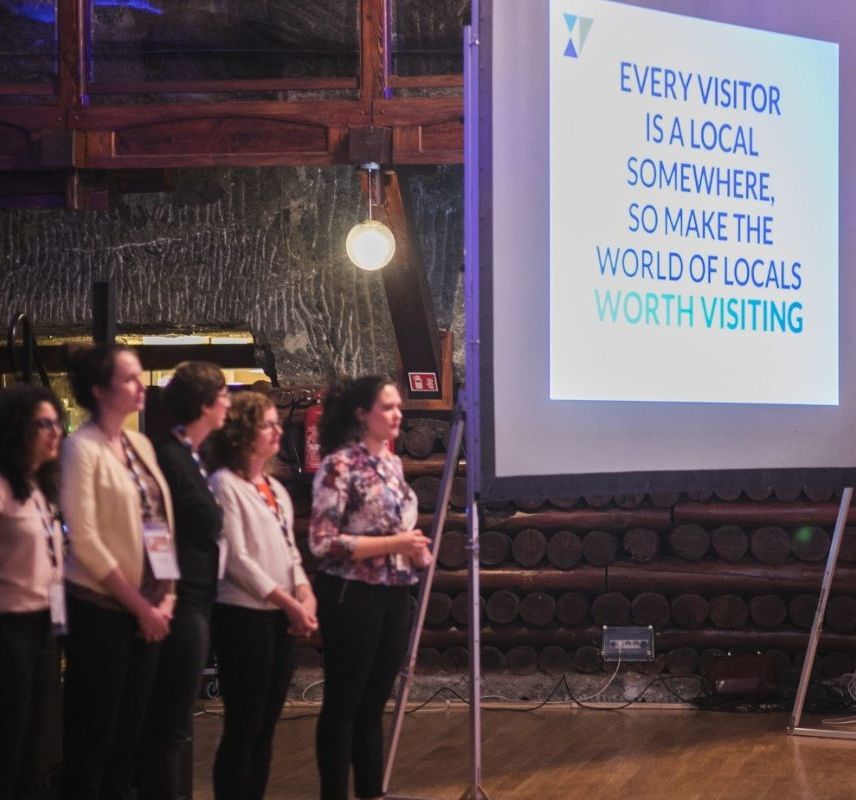 The participants then travelled to the Wieliczka Salt Mine to dine in a unique and spectacular decor. The Wieliczka Salt Mine Orchestra and the string quartet Exprimo offered moving performances, much to delight of those present. During the evening, the newly elected members of the OWHC Board of Directors were announced and the Young Professionals Declaration on Heritage and Tourism presented.

In closing, the members of the OWHC, the General Secretariat and the Regional Secretariats offered a warm expression of gratitude to Secretary General Denis Ricard, who will be retiring at the end of the year after heading the organization for more than 20 years. Mr. Ricard was instrumental in building a strong and dynamic international organization that has become THE reference for all urban world heritage issues.

During the morning, the Mayors’ Workshop brought together many official OWHC city representatives. This workshop highlighted the existence of similar situations faced around the world and strengthened already existing ties between member cities of the OWHC. These useful exchanges were made possible thanks to Mr. Peter Debrine, Senior Project Officer at the UNESCO World Heritage Nature, Sustainable Tourism and Outreach Unit, and Mr. James Rebanks, Expert Advisor to UNESCO World Heritage Centre.

At the same time, the Experts Workshop was underway, coordinated by Mrs. Cecile Smith-Christensen, Senior Advisor to UNESCO World Heritage Sustainable Tourism Program. This workshop focused on assessing the impact of tourism and improving the management of visitors to world heritage cities.

Without doubt, the flagship event of the World Congress is the General Assembly, during which members are called upon to make important decisions regarding the Organization’s future. In the afternoon, 64 official delegates were present, proudly representing their city as active members of the Organization. During the Assembly, the host city of the next World Congress was announced: congratulations to the city of Québec (Canada) on their win! 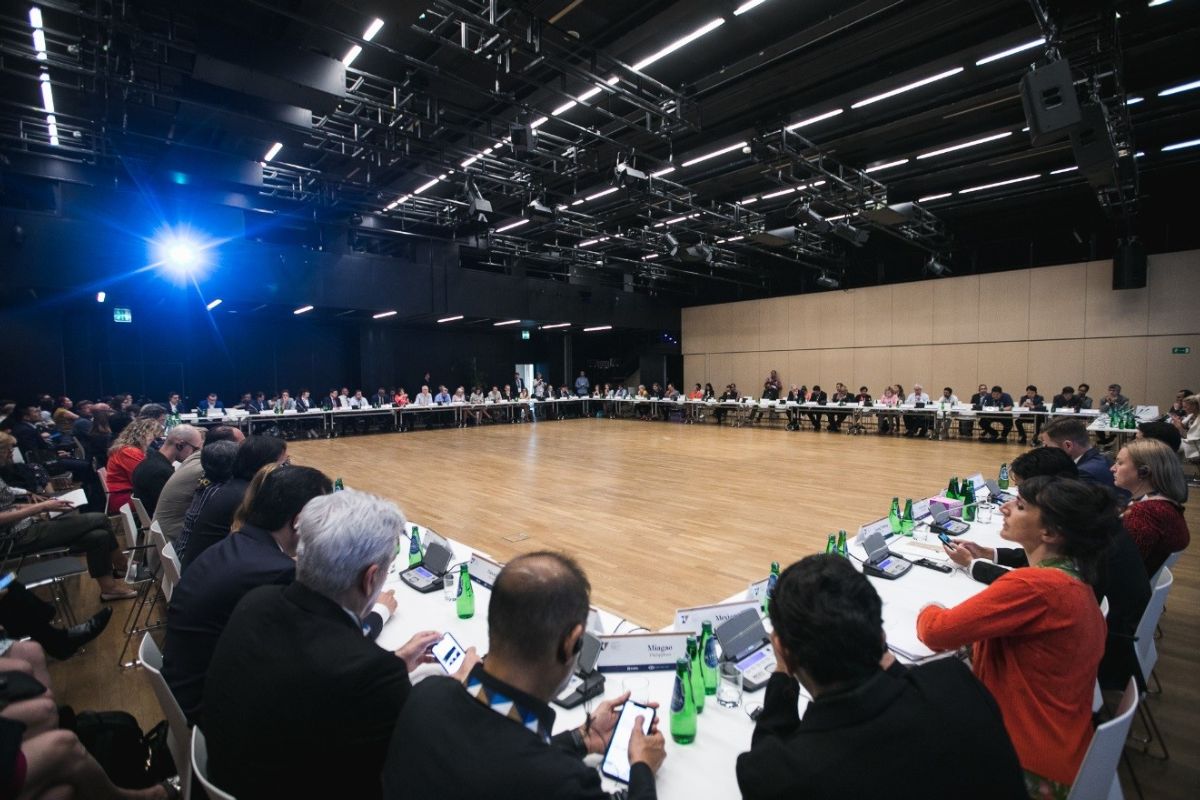 Robert J. Quarles van Ufford has vast experience in the field of cultural heritage, notably as Director of the National Monuments Organisation of The Netherlands, President of ICOMOS Netherlands and Secretary General of the National Committee for UNESCO in the Netherlands. In the past, he has also worked as a diplomat of the Dutch Foreign Service in Royal Netherlands Embassies around the world. His expertise in both World Heritage and international relations will allow him to successfully pursue the development and growth of the OWHC worldwide.

The last evening in the Garden of the Archaeological Museum in Krakow allowed the participants to discover an enchanting venue at the heart of the old city and attend the traditional presentation of the OWHC flag to the host city of the next World Congress. The mayors of Krakow and Québec were present for the occasion.

The last evening in the Garden of the Archaeological Museum in Krakow allowed the participants to discover an enchanting venue at the heart of the old city and attend the traditional presentation of the OWHC flag to the host city of the next World Congress. The mayors of Krakow and Québec were present for the occasion.

Find all the pictures of the Congress HERE. Do you have memorable moments of the Congress? Share them with us on social media by adding the hashtags #KrakowHeritage and #owhc2019krakow. And don’t forget to identify us @OrganizationofWorldHeritageCities!