Kraków is the capital of the Malopolska region, the metropolitan centre of the Cracow agglomeration and an important European metropolis

Former capital of Poland and the seat of Polish monarchs. In the Middle Ages, one of the major European administration and trade centres, an important religious, cultural, academic and crafts centre.

Cracow is located in the south of Poland, on the Vistula, the largest Polish river, between the Cracow and Częstochowa Upland, the Basin of the Nida, the Cracow Gate and the Sandomierz Valley.

The 1257 founding charter based on the Magdeburg Law specified the city’s new urban plan, with a centrally located Main Square and a regular chequered pattern of streets running from it. The Main Square was the largest in medieval Europe: each of its sides is 200 m long. It has been preserved in an unmodified shape and is still the heart of the city. In 1978, the Main Square and the surrounding chequered pattern of streets were included on the first UNESCO World Heritage List, and in 2005 came first in the World’s Best Squares ranking held by the Project for Public Spaces.

In 2010, a tourist route located 4 metres below the surface of the Main Square employing state-of-the-art multimedia technologies was opened. It presents, among other things, the remains of a medieval settlement, elements of buildings dating back to the 12th and 13th centuries and over 700 objects of everyday use.

The Cloth Hall (a medieval trading hall, one of most readily recognised Polish historical monuments and Cracow’s most popular shopping arcade) situated in the centre of the Main Square, the Romanesque church of St. Adalbert, the lone tower of the town hall demolished in the 19th century and St. Mary’s Basilica with two towers dominating over the city (for 600 years now, a bugle call that resounds to the four parts of the world from the higher of the towers) have also been preserved until today.

At present, there are several hundred cafes, pubs and restaurants around the Main Square.

The medieval town was surrounded with a fortifications complex, with the Barbican, fragments of city walls with St. Florian’s Gate and several towers. A unique park, Planty, was created in the 19th century in place of city walls, embankments and moats, encircling the oldest part of the city.

The tourists are always amazed by the Royal Route, a historical route leading from the main entrance gate (St. Florian’s Gate) to the Royal Wawel Castle at Wawel Hill. The Route was taken by the Polish monarchs when ceremonially entering the city and during coronations and funerals. Thanks to the Royal Route for Disabled Tourists project, the Route may also be discovered by people with visual impairments and the disabled. Under the project, 12 bronze models offering a tactile experience of the most popular Cracow sights (the Barbican, St. Mary’s Basilica, the Cloth Hall, St. Andrew’s and St. Peter and Paul’s churches and Wawel Hill) have been produced. The models have inscriptions in Braille (in Polish and in English) and the plinths of the models are designed in such a way so as to enable persons in wheelchairs to come as close as possible.

Kazimierz, once a separate town, today a district of Cracow, offers the unique atmosphere of a centuries-old coexistence of two cultures: Jewish and Christian. A space full of Judaist historical monuments of world importance, but primarily an area vibrant with life: antiques and works of art, fairs, live music in local pubs and restaurants. Nowa Huta, the fullest and most interesting realisation of social realism architects’ plans, is an intriguing district, as well. Podgorze, full of greenery, mystery, a cosy atmosphere and modern museums, also draws attention and is easily accessible from Kazimierz through the Father Laetus Bernatek footbridge.

In 2004, the oldest part of the Nowa Huta district was entered into the Cracow register of historical artefacts. City authorities are currently trying to have it entered on the UNESCO World Heritage List.

The historical centre of Cracow was listed as a UNESCO World Heritage Site under criterion IV as an outstanding example of an urban and architectural complex. The Cracow Old Town is a unique treasury of works of arts, historical buildings and historical souvenirs. The most important and the oldest of the Cracow’s over one hundred churches are located there, together with numerous mansions and tenements. Over 1,150 of Cracow historical monuments representing almost all periods and architectural styles (from the Middle Ages until today) have been entered into the register of historical artefacts.

Cracow is a city with a history of more than a thousand years. The first written mention about Cracow dates back to 965 AD, to a travel relation by Ibrahim, an Arab merchant. Legend has it that the name Cracow comes from the name of Prince Krak who established his castle at Wawel Hill towering over the city.

For several centuries, Cracow was the capital of Poland, with the Wawel Royal Castle playing the role of the seat of the monarchs of Poland until the end of the 16th century. Today, the castle is a museum establishment with 71 exhibition rooms, including the royal chambers, the treasury and the armoury. The castle cathedral saw 37 coronation ceremonies and holds the remains of Polish monarchs, heroes and poets. Contemporary Cracow is the capital of the Malopolska region, a major cultural and academic centre in Poland and an important European metropolis. It is one of the most recognisable Polish cities in the world and an important place on the tourist map of Europe with over 8 million visitors from Poland and abroad every year.

Key events in the history of the city:

1257 – Prince Boleslaw the Chaste grants a foundation charter to Cracow.

1320 – The coronation of Wladyslaw the Elbow-high and his wife, Jadwiga – the first coronation in Cracow after the unification of the Polish state previously divided into several provinces. From there on, until 1734, Cracow was the coronation city for Polish monarchs.

1333–1370 – The rule of Casimir the Great, a patron of art and learning. He found two new towns, Kazimierz and Kleparz, which today are districts of Cracow. During his rule, two Gothic churches were erected (the Franciscan and the Dominican church) and the construction of St. Mary’s Basilica commenced. In 1364, the King founded the Academy of Cracow (the second oldest university in Central Europe, after the Prague University), which was later transformed into the Jagiellonian Univeristy. Nicolaus Copernicus, Jan Kochanowski, Pope John Paul II and other outstanding Poles studied there.

1386 – The Grand Duke of Luthuania, Jogaila, was crowned King of Poland. He started the largest Polish royal dynasty ruling the country for over 200 years. During the rule of Jogaila, Cracow was the capital of a monarchy covering ethnically Polish territories and massive Lithuanian and Russian lands. The royal court played an important role in shaping cultural and artistic life. Outstanding humanists, scientists and artists came to Cracow from Italy, Germany and other countries.

1525 – Albrecht Hohenzoller, Grand Master of the Teutonic Order, paid liege homage to King Sigismund I, which constituted a visible symbol of the power of the Jagiellonian state. This event went down in history as the Prussian Homage.

1596 – A fire broke out at the Wawel Royal Castle. King Sigismund III Vasa decided to move his residence to Warsaw.

1655 – The Swedish invasion of Poland; Cracow is captured.

1702 – The Swedish troops again capture and plunder the city during the Great Northern War.

1772 – The first partition of Poland. The southern part of Malopolska, including Cracow, is taken by Austrian troops.

24 March 1794 – The Kosciuszko insurrection against Russia begins in Cracow. The act of insurrection was read out at Main Square and the leader of the insurrection, Tadeusz Kosciuszko, took a ceremonial oath.

1795 – In accordance with the partition treaty, Cracow finally falls under Austrian rule. The city was later incorporated into the Duchy of Warsaw established in 1807. After the fall of Napoleon, Cracow was granted the status of a free city (1815–1846).

1831 – After the failure of the November Uprising, Cracow was the only city to retain its autonomy. It became a symbol of Polishness and a spiritual capital of the country. Almost all the political parties operated legally. Scientific and cultural institutions flourished: the Cracow Learning Society developed in the Academy of Arts and Sciences, the Academy of Fine Arts was established in 1818, and the Fine Arts Association was formed in 1854.

1849–1914 – The Cracow Stronghold, one of the largest European defensive complexes at the time is built in Cracow and its surroundings.

6 August 1914 – The First Cadre Company, a unit formed for direct combat with Russian forces, left Cracow under the command of Marshal Jozef Pilsudski and moved to the so-called Congress Poland in order to start an anti-Russian uprising there.

6 September 1939 – Five days after the outbreak of World War II, Nazi troops march into the city.

6 November 1939 – Sonderaktion Krakau, a Nazi operation against Polish academics. Representatives of the intellectual elite of the city were invited to a lecture and then led out of the lecture hall and transported to the Gestapo prison at Montelupich street. Most of those arrested were subsequently sent to the Sachsenhausen concentration camp.

1949 – The construction of Nowa Huta (currently a district of Cracow), a would-be independent city designed in accordance with the principles of social realism, commenced. A metallurgical conglomerate plant was located there.

1974 – The Council of Ministers adopted a special resolution on the protection of Cracow complexes of historical monuments. The resolution recognised Cracow as the greatest monument of national culture and a rich historical past, a great contribution to Polish political, cultural and social thought and a city of most valuable historical monuments and works of art, both in Poland and Europe.

1978 – The historical centre of Cracow, encompassing the Old Town surrounded by the Planty park, together with Wawel Hill, the town of Kazimierz and the suburb of Stradom were included on the first UNESCO World Heritage List.

2000 – Cracow was awarded the prestigious title of the European Capital of Culture.

The deposit of rock salt in Wieliczka and Bochnia has been mined since the 13th century. This major industrial undertaking has royal status and is the oldest of its type in Europe. The site is a serial property consisting of Wieliczka and Bochnia salt mines and Wieliczka Saltworks Castle. The Wieliczka and Bochnia Royal Salt Mines illustrate the historic stages of the development of mining techniques in Europe from the 13th to the 20th centuries: both mines have hundreds of kilometers of galleries with works of art, underground chapels and statues sculpted in the salt, making a fascinating pilgrimage into the past. The mines were administratively and technically run by Wieliczka Saltworks Castle, which dates from the medieval period and has been rebuilt several times in the course of its history.

This serial property consists of all three components historically constituting one royal enterprise Kraków Saltworks: Wieliczka salt mine, Bochnia salt mine and the Saltworks Castle in Wieliczka. Both mines present the diversity of the ensemble, in mining, technical and artistic terms, and the completeness of the evidence of the historically ancient working of rock salt in this region of what is today Southern Poland. The Wieliczka Saltworks Castle, which historically administered the mines and managed sales of the salt for the benefit of the princes and kings of Poland, gives a new dimension for the Outstanding Universal Value of the ensemble.

Criterion (iv): The Wieliczka and Bochnia Royal Salt Mines illustrate the historic stages of the development of mining techniques in Europe, from the 13th to the 20th centuries. The galleries, the subterranean chambers arranged and decorated in ways that reflect the miners’ social and religious traditions, the tools and machinery, and the Saltworks Castle which administered the establishment for centuries, provide outstanding testimony about the socio-technical system involved in the underground mining of rock salt.

An invitation for the youngest inhabitants of Krakow. Meet Lajkotek on the Solidarity Day of World Heritage Cities

Krakow 2019 – Read the Declaration of the Young Professionals Forum 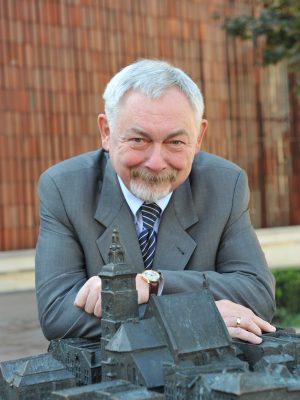 Plenipotentiary of the Mayor of Kraków for Culture
Municipality of Krakow