The delegation of Gyeongju and the OWHC-AP Regional Secretariat visited Uzbek cities of Samarkand and Bukhara from December 13th to 15th to enhance Gyeongju’s cooperative relationship with the cities, while signing Memoranda of Intent with 4 (four) central Institutes along in the Central Asia Silk Road.

With Mayor Joo, Nak-young of Gyeongju as the head of the delegation, the delegation consisted of a total of 10 (ten) representatives from the City of Gyeongju, including Mr. Dong-hyup Lee, the vice speaker of the Gyeongju City Council members and the staff members of the OWHC-AP Regional Secretariat.

In celebration of the 30-year anniversary of the establishment of the official diplomatic relationship between Republic of Korea and Uzbekistan, the visit mainly focused on the joint effort of cooperation for, Gyeongju’s Silk Road Project, the enhancement of the cities’ ties, and the promotion of the 4th OWHC-AP Regional Conference due to be held in Gyeongju in September 2023.

The delegation first visited the city of Samarkand on the 13th, which was meaningful since this was the first visit in 9 years by Gyeongju to Samarkand since the two Cities signed a treaty of Friendly Relations in 2013. In this year’s meeting, both cities agreed on strengthening joint cooperative effort for co-development and prosperity and enhancing friendship.

Also, in celebration of the Korea Silk Road Project, a co-project of the City of Gyeongju and the Province of Gyeongbuk, and also the 10-year anniversary of the establishment of the Friendly Relations between Gyeongju and Samarkand, Gyeongju has announced its plan to invite the significant Central Asian cities along the Silk Road to the scientific symposium “Silk Road and World Heritage Cities,”, which will be a special session of the 4th OWHC-AP Regional Conference due to be held in September 2023.

For this purpose of inviting Central Asian Cities along the Silk Road, the delegation of Gyeongju also visited the City of Bukhara, whose history involves a 2,500-year history of Silk Road trade as an Oasis city. In particular, its Historic Centre was inscribe on the list of UNESCO World Heritage in 1993, rendering the city a “museum without a roof.” Gyeongju and the personnel from the Provincial and the City Government of Bukhara agreed on active interactions and cooperation in the fields of heritage, culture etc. in the future. Additionally, International Scientific-Research Center for Study and Preservation of
Central Asian Historical and Cultural Heritage in Bukhara State University signed a Memorandum of Intent with the OWHC-AP Regional Secretariat for future exchanges and collaboration in the educational and scientific areas, as well as participation in the upcoming 4th OWHCAP Regional Conference.

The OWHC-AP and Gyeongju’s tireless effort to engage with the Cities and Institutes in the Silk Road during the visits also resulted in the signings of an Memorandum of Understanding with the International Institute for Central Asian Studies (IICAS), and Memoranda of Intent (MOIs) with Samarkand State Museum-Reserve, Silk Road International University of Tourism and Cultural Heritage, Samarkand Institute of Archeology, and Bukhara State University.

Mayor Joo, Nak-young, the head of the delegation of Gyeongju, expressed that “the Silla dynasty prospered through international trade following the unification of the Korean peninsula. Through the Silk Road project, the City of Gyeongju can realize its historical and cultural dream of expanding and elevating Gyeongju’s capacity in the global stage with a strong international vision,” before adding that “this visit to Uzbekistan serves an important starting point for the OWHC-AP Regional Secretariat to reach further into the Central Asia region for concrete cooperation, exchanges, and co-prosperity. 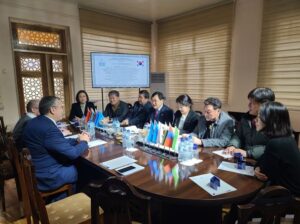