The colleagues in Salzburg just recently managed to publish another edition of their series “A Story behind History” about the renovation of their Franciscan monastery.

Founded in Salzburg in 1583, the Franciscan monastery has always been an important place to meet in the heart of Salzburg’s historical centre. As early as Roman times, this area constituted a major interface in the urban life of what Ancient Rome called Salzburg: Iuvavum. It is where the main pulsating paths of Salzburg’s Old Town still converge. A striking arch connects the monastery with the church and, at the same time, forms a passage from the Festspielhaus to the Cathedral.

The primary objective of the current general refurbishment was to make the monastery a place which can once again be experienced in line with its principal purpose. The complex, which has evolved over the centuries was returned into its original structure, especially in the area around the superimposed cloister, thereby exposing its typology. New ways of utilising the building became possible through the modernization and partial opening of the time-honoured establishment.

Learn about the restoration project with its challenges in the newly published booklet #7 on Salzburg World Heritage to be downloaded in its German/English version. 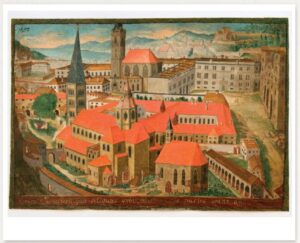