On February 12, the City of Regensburg had the pleasure to welcome Mr. Denis Ricard, the Secretary General of the OWHC. Mayor Ms. Gertrud Maltz-Schwarzfischer and the Chancellor for Culture, Mr. Klemens Unger, met with Mr. Ricard and the team of the Regional Secretariat for Northwest Europe and North America in order to discuss further  cooperation with the General Secretariat and common projects. It was also  the opportunity Mr. Ricard to officially thank the Mayor of Regensburg for hosting the Secretariat already for more than 7 years and invite her to join the upcoming World Congress in Krakow in June. 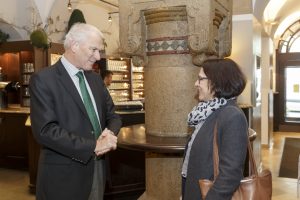