Nora Gomringer had the last word as she exclaimed, “Urbs felix! . . . Happy town!” The director of the International House of Artists Villa Concordia, said just that at the end of the almost two-hour ceremony. All of the 1,500 guests in attendance at the concert and congress halls could relate—they came to celebrate the climatic finale of the Old Town of Bamberg’s 25th World Heritage Anniversary on the evening of the 11th of December, 2018.

A happy town it is because, as Lord Mayor Andreas Starke noted, Bamberg’s valourization as a place of outstanding universal value and shared heritage of humanity “was probably the most important event in the town’s recent history.” And happy the town is, too, because all of the citizens of Bamberg identify with this heritage and live with it in a unique way with an associated sense of responsibility, as the speaker of the evening, the President of the German UNESCO Commission, Prof. Dr. med. Maria Böhmer, highlighted. And the town is most certainly happy because, here at home, the world famous Bamberg Symphony Orchestra left a lasting impression on a very special and festive evening.

It was reserved to Patricia Alberth, the Director of the World Heritage Office Bamberg, to present the original English text of the certificate of inscription, issued December 11, 1993, at the beginning of the ceremony. Lord Mayor Andreas Starke then brought to recollection the obstacles that had to be overcome to receive the World Heritage designation. Dr. Tilman Breuer’s convincing nomination dossier contributed decisively to this success. “He was the father of this success,” said the Lord Mayor. Albeit, “our shared heritage can only continue to be if the people on the ground preserving and animating it understand its significance and act as advocates.” He subsequently gave thanks to all of the citizens and the diverse initiatives committed each day to preserving the World Heritage.

“Bamberg is a forerunner,” was the affirmation that came from Prof. Dr. med. Maria Böhmer, who had been elected President of the German Commission for UNESCO in Bamberg last June. “You have shown most impressively how one can successfully manage to incorporate actors from the municipal, business, educational, as well as the civil sectors of society.” UNESCO World Heritage sites are more than just evidence of unique works and outstanding achievements of the past. They are also assets that build bridges into the future, find common ground, and advance identity and stability. “UNESCO World Heritage is a spiritual home for people across the world. It binds their identity, their coexistence and their cultural diversity. Bamberg’s World Heritage exemplifies this in a most exciting way.” Prof. Böhmer gave special praise to the World Heritage Office under the direction of Patricia Alberth: “Bamberg is also a forerunner when it comes to conveying the idea of World Heritage. As such, the Bamberg World Heritage Office is making an important contribution.”

The closing words of Künstlerhaus director, Nora Gomringer, gave tribute to Bamberg in a very different style: she let her creative play on words roll, drawing on the relatable merits of the Franconians and especially of Bamberg’s burghers like those of the previous speakers. Being here is “authentic” and “inimitable.” “You look each other in the eye.” Urbs felix – [a] happy town, [indeed].

And then the Bamberg Symphony Orchestra under principal conductor, Jakub Hrůša, rounded off a brilliant finale. Having shone [in performing] earlier the “Overture to Don Giovanni” by Mozart, the famous “Moldau” by Smetana and the short “Bagatelle for Orchestra” by Friedrich Cerha, the “Bamberger March” by Jörg Widmann was a contemporary highlight, a musical firework! 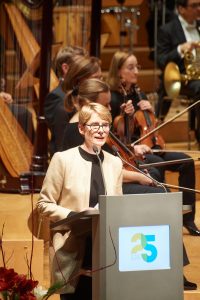 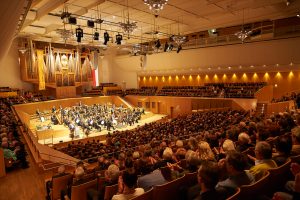