City and municipality of Oaxaca State

San Pablo Villa de Mitla celebrates in 2019 the 9th anniversary of the declaration of the “Prehistoric Caves of Yagul and Mitla in the Central Valley of Oaxaca”, by UNESCO, as World Heritage Site.

This site comprises two sets of pre-Hispanic archaeological remains and a series of prehistoric caves and rock shelters. In some of these shelters, archaeological remains and remains of rock art have been found that are testimonies of the life of the first sedentary farmers. In the cave of Guilá Naquitz, 10,000-year-old cucurbitaceae seeds have been found, which constitute the earliest remains of domesticated plants discovered to date in the Americas, as well as fragments of corn ears that are one of the oldest testimonies of the domestication of this plant.

This property lies on the northern slopes of the Tlacolula valley in subtropical central Oaxaca and consists of two pre-Hispanic archaeological complexes and a series of pre-historic caves and rock shelters. Some of these shelters provide archaeological and rock-art evidence for the progress of nomadic hunter-gathers to incipient farmers. Ten thousand-year-old Cucurbitaceae seeds in one cave, Guilá Naquitz, are considered to be the earliest known evidence of domesticated plants in the continent, while corn cob fragments from the same cave are said to be the earliest documented evidence for the domestication of maize. The cultural landscape of the Prehistoric Caves of Yagul and Mitla demonstrates the link between man and nature that gave origin to the domestication of plants in North America, thus allowing the rise of Mesoamerican civilizations.

The Prehistoric Caves of Yagul and Mitla in the central valley of Oaxaca is an extensive cultural landscape that includes caves and shelters, one of which, the Guilá Naquitz cave has provided extraordinarily well preserved botanical evidence of bottle gourds, beans and squash and the earliest known maize cobs, and two others, Cueva Blanca and Gheo Shih sites have provided evidence of Pleistocene animals and stone tools and the seasonal use of the abundant summer resources of fruit and small mammals.

Criterion (iii): The botanical evidence from Guilá Naquitz cave related to the domestication of other plants, squash, gourds and beans, linked with the archaeological evidence from Cueva Blanca and Gheo Shih, can together be seen to be an exceptional testimony to the evolution from hunter-gathering to more settled communities in this area of central America. 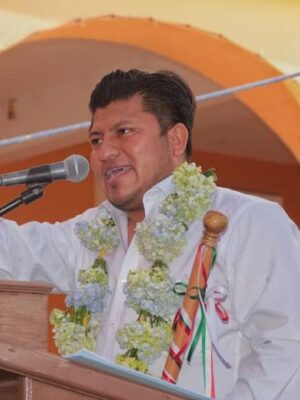