City in the Trujillo Province

A history of Trujillo

When the Spaniards set out to conquer Tawantinsuyu, north of the central Andes, they chose the valley of Chimo to found their Spanish city, because of its magnificent geographic location and the fact that the Chimú were the enemies of the Inca and could contribute to the collapse of the Inca Empire.

The foundation of the city of Trujillo took place on a certain day, during the last week of November or the first week of December 1534, in a location in the valley of Chimo known as Canda.

Like all cities in America, the layout of Trujillo followed a reticular pattern from a central plaza. Contrary to other cities in America where the division of city blocks took place on four lots, the blocks in Trujillo are on three lots each covering 4000 to 5000 m2 and bordered on two streets.

Another characteristic of the city is that in addition to the occupation of prime pieces of land around the Central Plaza by important dignitaries and the church, Indian chiefs (Cacique) were also allowed to settle at the city’s centre, especially the chiefs from the region of Cajamarca (Diego Cacique de Cajamarca, Melchor Verdugo, Pedro Angasnapón, Martín Caruacusma, Antonio Condormango and Martín Caxaxas.)

In 1539, the first religious orders (Notre-Dame de la Merci, Franciscan, Dominican, Augustin – there were up to 11 orders) arrived in the city. One of the characteristics of this Historic Centre is that in this district, the church of Saint Anne was built two street corners from the Central Plaza. In its beginnings, this church was used to evangelize the Indigenous Peoples.

During the decade from 1571 to 1580, the city was rocked in 1578 by a coastal El Niño phenomenon that damaged the structures of most of the buildings. Again, in an earthquake on February 14, 1619, buildings crumbled, resulting in 400 deaths. The city was almost destroyed, which led to its rebuilding in the new Mannerist style, indoors and outdoors. Two more quakes took place on January 6, 1725 and on September 2, 1759, but neither caused extensive damage. However, they did have an impact on some historic buildings in the city.

Construction of the wall began in 1687 to defend the city from attacks by the pirates Sharp and Davis, who invaded the coasts of our country. The endeavour was entrusted to Italian architect Joseph Formento. The defensive structure was 5.5 km long and consisted of 15 bastions, 15 shades and 5 covered gates. Today, all that remains is one bastion and a few sections of shades.

Another aspect that warrants mentioning is the pavement of the streets in Trujillo. In 1792, a by-law promulgated at the initiative of Mayor Gil de Taboada resulted in significant urban progress.

During the 19th century, with the establishment of the Republic, the city moved forward with the creation of the first Superior Court of Justice in Peru, the Saint-Jean National College and the Trujillo Charitable Organization. Italian traveller Antonio Raimondi, who visited our city, was struck by the fact that there were four promenades in such a small city: the Mansiche, Huamán, Moche and El Recreo promenades. It was during this century that the establishment of schools run by religious orders brought great cultural progress to the city, with Trujillo becoming the cultural reference point in the country.

Since the last decade of the 20th century, Trujillo has become a metropolis with a population of close to 900,000. This lively, dynamic city is a regional reference point for a large portion of northern Peru; it is a vast territory and a huge social and economic space with resources and a sizeable potential for sustainable development.

Cultural and monumental historic values of importance largely exceed regional and national borders, imparting an international dimension that reaffirm Trujillo’s role of capital of culture. There are important archeological remains of great value, such as the Chan Chan Archeological Zone, declared a World Heritage by UNESCO, Alto Salaverry, Caballo Muerto, Cerro Oreja, Complejo Huacas del Sol y de la Luna, Galindo, and hydraulic infrastructures, among others. There is the Historic Centre and traditional indigenous villages such as Moche and Huanchaco.

There are also different forms of popular cultural expression in cuisine and seafaring that are flourishing and classified as a National Intangible Heritage.

The Historic Centre of Trujillo

The Historic Centre is the most important part of the city. Its population is estimated at 8,500 and the area covers 133.5 hectares. On November 28, 1972, it was declared a Monumental Area in Supreme Resolution No. 2900.The area has a rich cultural heritage, buildings of great architectural value and characteristic monumental urban spaces. Since the city’s foundation, cultural, social and economic activities have taken place here, at the Historic Centre. It is a district that preserves the city’s historic memory and identity.

The Urban Development Plan for the Historic Centre of Trujillo provides guidelines for the management of this space. It was developed for the first time in October 2001 during the Agenda 21 Local – Trujillo. The Plan documents the development policies for this important district within the city inscribed on the UNESCO World Heritage List under the category “Historic Centre.” 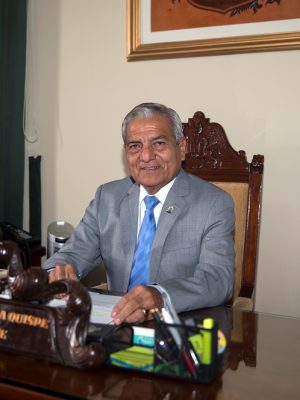