Festivities of the 29th Solidarity Day of the OWHC

The 29th Solidarity Day of World Heritage Cities was a special edition as we were finally able to gather in person in Quebec City, Canada as part of the 16th World Congress. Representatives of 43 member cities celebrated this joyous day with the OWHC team, as well as several participants who attended to the Congress as experts, observers, and partner organizations.

During sessions 1 and 2 of the Symposium: “Enhancing Livability in World Heritage Cities”, held on the 8th of September, several speeches form mayors and elected officials, highlighted the value and diversity of our member’s heritage, as well as reiterated the need of a collective effort for their preservation and development for future generations.

As part of the 29th Solidarity Day of the OWHC many of our members also organized activities in their cities.

To underline the Solidarity Day, the City of Québec implemented a citizen program in parallel to the World Congress events. The program involved a total of seven activities to discover or rediscover the rich heritage of Old Québec, and in this framework, on the 8th of September, an exhibition of old photos on Quebec City was inaugurated. 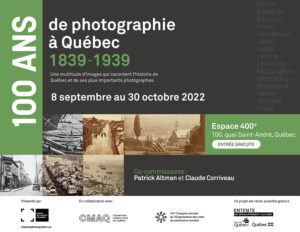 The city of Bamberg hoisted the golden World Heritage flags at Bamberg’s town hall. Moreover, during the Bavarian summer holidays, families were able to enjoy free tours through their home city, as well as special activities were prepared for children, such as: medieval crafts, church history and night watch. 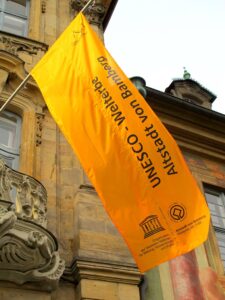 In celebration of the Solidarity Day the city of Cordoba hoisted the OWHC flag at the “Puerta del Puente” located in the historic center of the city. Furthermore, the city organized the “World Heritage City Lab: Sustainable Development Practices for Urban Heritage”, held on 12, 13 and 14 September 2022 both on-line and on-site. 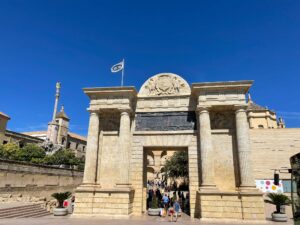 The City Council of Granada organized an extended series of free cultural activities aimed at all audiences, from 8-18 of September. Among the various activities developed are: the traditional open days to different monuments of the neighborhood, some of which are difficult to access during the weekends such as the Carmen del Aljibe del Rey; a concert of Andalusian music in the Maristan and another of Baroque music in the Church of the Monastery of Santa Isabel la Real; a ringing of bells of the churches and convents of the Albaicín; the celebration of the Verbena de la Aurora; the inauguration of temporary exhibitions; the presentation of 5 Multimedia Guides to explore the Albaicín which are downloadable on mobile devices through the Aumentur application; the organization of various guided tours; and many others.

The city of Krakow shared on media a kind message of heritage, resilience, and solidarity.

The Solidarity Day celebrations from the city of Philadelphia honoured the global impact of MSNBC anchor, Ali Velshi, and aimed to support World Heritage partners in Ukraine with 10% of net proceeds being donated to support the World Heritage City of Lviv. 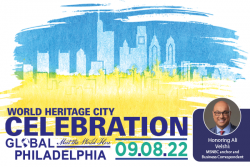 At the invitation of the city of Philadelphia, the Mayor of Lviv, Mr. Andriy Sadovyy, shared an inspiring video of heritage, and resilience for the occasion of the Solidarity Day.

In celebration of the Solidarity Day the mayor of the city of Segovia sharer on media a video highlighting the importance of heritage and some activities currently being implemented in the city. The OWHC flag was also hoisted in the historic centre.