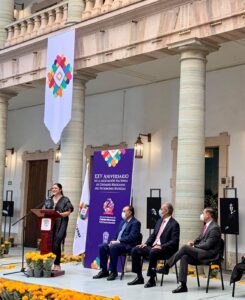 The National Association of Mexican World Heritage Cities A.C. was created in 1996 with the objective of joining efforts to work for the protection, enhancement and promotion of Mexican cities inscribed on the World Heritage List of the United Nations Educational, Scientific and Cultural Organization.

On October 31st, the commemorative ceremony for the XXV Anniversary of the Association took place in the majestic Alhóndiga de Granaditas, with the participation of the Secretary of Culture of the Federal Government, Municipal Presidents and former presidents of the Association, as well as the representation of UNESCO in Mexico and other local and federal authorities.