On August 7th, The Ceremony of the Affiliation of Macau Special Administrative Region in the Organization of World Heritage Cities (OWHC) was successfully held in Macau in the form of a video conference.

As a unique example of the coexistence of Eastern and Western cultures, Macau is a city with a long history and rich heritage resources. The “Historical Centre of Macau”was inscribed in the UNESCO World Heritage List in 2005 and this year has marked the 15th anniversary of its inscription. By joining the OWHC at this special time, Macau looks forward to strengthening the communication and cooperation with other world heritage cities and making more contributions on matters of the conservation and management of world heritage.

During the affiliation ceremony, Mr. Jacek Majchrowski, President of the OWHC warmly welcomed Macau to join the OWHC in his video speech. Mr. Robert Piaskowski, Representative Plenipotentiary of the Mayor of Krakow mentioned that this grand event was a milestone in the development of the OWHC in China. Ms. Lee Minaidis, Interim Secretary General of the OWHC declared that Macau has become a member city of the OWHC. Ms. Andréanne Charest, Deputy Secretary General of the OWHC exchanged gifts with Macau on behalf of the OWHC. Ms. Ao Ieong U, Secretary for Social Affairs and Culture of the Macau Special Administrative Region Government, accepted the certificate on behalf of Macau and looked forward to strengthening exchanges and cooperation with the OWHC in the future. Representatives of the Macau Special Administrative Region Government, representatives of member cities of the OWHC and of Chinese heritage cities, as well as international heritage experts also attended the ceremony. The ceremony was hosted by Dr. Huang Yong from OWHC China Regional Secretariat.

Jointly organized by the Macau Special Administrative Region Government and the OWHC China Regional Secretariat, the ceremony aims to encourage a speedy recovery for all the member cities facing the impact of the pandemic and the revival of global inter-connectivity. The Board of Directors of the OWHC at its meeting in June of this year unanimously resolved to establish the Regional Secretariat for China. 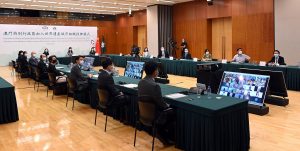 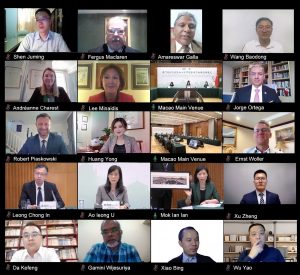