Yaroslavl, Kazan and Bolgar Were Presented at the International Exhibition

Eurasian cities were presented at the international exhibition “Heritage of Eurasia” that took place on April 30 – May 1, 2019 in the framework of IX International Conference of Eurasia World Heritage Cities in Denpasar, Indonesia, under the theme “Resilient Heritage and Tourism”. 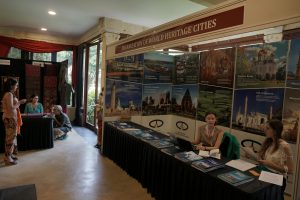 Local authorities, international experts and representatives of the scientific community from 10 countries gathered at the conference to discuss what measures need to be taken to preserve the heritage in rapidly changing climate.

In addition to the Balinese culture and art the heritage of Kazan, Moscow, Bolgar, Yaroslavl, Sviyazhsk, Osh, Tabriz and other cities was presented.