Eurasian Cities in a Struggle for Heritage Preservation

The capital of Bali, Denpasar city, has become a main platform for the discussion of climate change affecting the state of ancient cultural and architectural monuments.

Local leaders, international experts and academia from 10 countries gathered at IX International Conference of Eurasia World Heritage Cities to discuss what measures need to be taken to preserve the heritage in a rapidly changing climate. The conference was held from April 29 to May 2, 2019 in the city of Denpasar at the kind invitation of Mayor Ida Bagus Rai Dharmawijaya Mantra on the theme “Resilient Heritage and Tourism”. The participants included representatives of Russia, Indonesia, Kyrgyzstan, Uzbekistan, South Korea, Kazakhstan, South Africa, Canada, Ukraine and China.

The first day of the conference, April 29, started with the children’s drawings competition “Heritage Through Children’s Eyes”. It was held under the auspices of the Organization of World Heritage Cities with the participation of more than 200 Denpasar schoolchildren. The results were summed up on the same day, but the diplomas were presented to the winners in different age categories in a festive atmosphere during the official reception on behalf of the mayor of Denpasar.

The official opening ceremony of the conference took place on Tuesday, April 30, with the participation of Denis Ricard, Secretary General of the Organization of World Heritage Cities, Wayan Koster, Governor of Bali, Ida Bagus Rai Dharmawijaya Mantra, Mayor of Denpasar, Rasikh Sagitov, Regional Coordinator of OWHC for Euro-Asia and Prof.I Gede Pitana, Senior Expert of the Ministry of Tourism of Indonesia.

According to Rasikh Sagitov, the conference should be the first step in the implementation of joint measures to preserve heritage, taking into account modern climatic realities. “Cultural heritage is a driver of urban development in the modern world. I sincerely believe that our joint discussions will be a significant contribution to the common goal of the heritage preservation”, – Rasikh Sagitov said in his speech.

After the opening ceremony of the conference the international exhibition “Heritage of Eurasia” was opened. In addition to the Balinese culture and art the heritage of Kazan, Moscow, Bolgar, Yaroslavl, Sviyazhsk, Osh and other cities was presented.

In the framework of the plenary session “Preserving Heritage in Climate Change” Kamil Nugaev, Mayor of Bolgar, gave a speech about what measures are being taken to preserve the Bulgarian Historical and Archaeological Complex which is the UNESCO World Heritage Site.

Gulgaky Mamasalieva, Director of the International Center “Interbilim”, spoke about the significant role of NGOs in the complex process of heritage conservation. Her colleague from a non-profit organization, Secretary General of the South African Local Government Association Xolile George, took a floor with the benefits that cultural heritage brings to the cities where they are located, and how to properly manage it.

Since the topic of the conference was directly related to climate change, the presentation of Saida Zagidullina, Director for Development of UCLG-Eurasia, on the topic “SDG #13: The Role of Local Governments” was particularly relevant. In her report, Ms.Zagidullina provided clear examples of how local authorities in Eurasia make a significant contribution to the achievement of the Sustainable Development Goal #13 “Climate actions”.

The final speech of this session was made by Leon Wai Man, Vice-President of the Cultural Affairs Bureau of Macao. Due to the geographical location of the city, its cultural center often faces typhoons, storm winds and other natural disasters. In order to avoid irreversible consequences for heritage sites located in the city, the city leadership stay in constant contact with the managers of the heritage sites and provide them with all the necessary support. 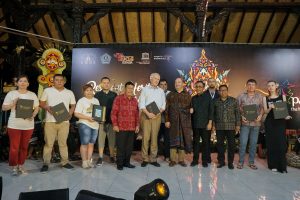 After a short break, the conference continued with the business and tourism dialogue “Key factors of the tourist attractiveness of cities”. Ida Bagus Gede Sidharta Putra, Chairman of the Denpasar Tourism Promotion Board took the floor first. Mr. Putra said that every year more than 60 million tourists visit Bali and are attracted by its distinctive culture and unique heritage sites.

The presentation of the touristic potential of Kazan, presented by the Vice-Mayor of the city Evgenia Lodvigova, was a vivid performance. Especially the participants were impressed by the film about Kazan “1000 Worlds”, which contains all the most interesting things about the capital of Tatarstan. 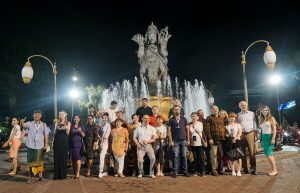 The complex of the Assumption Monastery on the town-island of Sviyazhsk is the third UNESCO World Heritage site located in Tatarstan. Artem Silkin, Director of the State Historical-Architectural and Art Museum of the town-island Sviyazhsk, spoke about preventive measures to preserve the island’s natural landscape, as well as interaction with the residents in the face of the increasing tourist flow.

Candidate of Historical Sciences, Associated Professor of Osh State University Samara Osmonova spoke about the Mountain Sulaiman-Too, that is located in the ancient city of Osh. In her speech, Samara Osmonova focused on the historical side of the development and establishment of the object as a cultural heritage of Kyrgyzstan.

The head of the Shymkent Tourism Department, Turar Akhmetov, was the final speaker of the business and tourism dialogue. In his presentation, the attention was paid to the preservation of ancient mausoleums, mosques and temples.

The third day of the conference was devoted to outside seminars on cultural and architectural sites of Bali. Thus, the participants visited the royal temple of Taman Ayun which was built in the heart of the Subak irrigation system, a UNESCO World Heritage Site, visited the ancient Blandjong column in Sanur and the majestic Bajra Sandhi Monument in the heart of Denpasar. 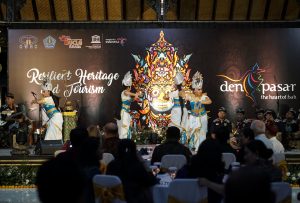 Then, the conference delegates were introduced the intangible heritage of the island of Bali. The workshops on cooking national dishes were held, a visit to the art gallery and an inspection of the exhibition of traditional Balinese goods were planned.

An important step towards development of heritage tourism through practical exchange and cooperation among member regions was the signing of the Denpasar Commitment on IX International Conference of Eurasian World Heritage Cities. Among the main points of the Commitment are capacity building in heritage conservation and heritage tourism, the involvement of tourism professionals and academia and cooperation amongst member cities.

The photos are available here