The image of the Kazan and Bolgar heritage has appeared in the city of Denpasar, the capital of the island of Bali (Indonesia).

The historical and architectural complex of the Kazan Kremlin and the Bulgarian historical and archaeological complex were painted in Denpasar within the framework of the project “Heritage of Eurasia” which is being implemented under the auspices of the Organization of World Heritage Cities. Earlier, the city of Derbent (Russia) and the city of Safranbolu (Turkey) exchanged the images of their heritage. 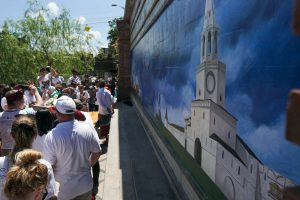 The place for the implementation of the project was chosen properly. More than 6 million tourists visit Bali annually, and the embankment of the Badung River where the image was opened is a favorite place of both locals and guests of the island.

On May 1, 2019 the opening ceremony of the image was attended by Denis Ricard, Secretary General of OWHC, Evgeniia Lodvigova, Vice-mayor of Kazan, and Kamil Nugaev, Mayor of Bolgar. According to Evgeniia Lodvigova, the project “Heritage of Eurasia” is an interesting way to tell about your city and to popularize heritage. 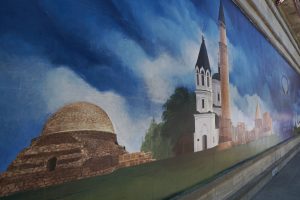 It is planned that this summer the image of Denpasar’s heritage will appear in the city of Bolgar.