Report on the 7th Conference of the Central and Eastern Europe

Report on the 7th Conference of the Central and Eastern European Member Cities of the Organization of World Heritage Cities Budapest, 9-12 September, 2009

The 7th conference of the Central and Eastern European Region was arranged traditionally by the City of Budapest in the centre of the Region. The participants of the conference (36 people from 19 cities) met first at the traditional welcome dinner on the evening of the 9th of September.

Next day the conference started with the ceremonial opening of Dr. Gábor Demszky, Mayor of Budapest. The participants were greeted by Dr. Katalin Kiss, Coordinator of the Central and Eastern European Region on behalf of the Regional Secretariat and by Lee Minaidis, interim Secretary General of the Organization of World Heritage Cities on behalf of the General Secretariat. After the opening ceremony Vasyl Kosiv, Deputy Mayor of L’viv presented the cultural heritage of L’viv with spectacular pictures.

In the break of the conference Imre Ikvai-Szabó Deputy Mayor of Budapest and Pavol Balžanka, Mayor of Banská Štiavnica opened the exhibition entitled “World Heritage – a Youthful Vision 2008” in the press room then the conference continued with Lee Minaidis’s report on the work and the programme of the Organization and Dr. Katalin Kiss’s report on the regional activities and programmes.

The afternoon session began with preannounced contributions touching upon the two main topics of the conference, that is:

Valerij Shevchuk, chairman of the Moscow City Cultural Heritage Committee presented the management plan of the Moscow world heritage area. Magos Kiriakos, MA architect of the Conservation Office of the Medieval Town of Rhodes spoke about the strategy of Rhodes for the preservation of the Rhodes world heritage area. Miron Breznoscák, senior official responsible for foreign relations and international cooperation gave a detailed description about the traditional children’s drawing competition entitled “World Heritage – a Youthful Vision ”. Eva Hnátkova, head of the Mayor’s Office of Kutná Hora presented about the preservation projects of her city. Ladislau Rosenberg, advisor of the mayor of Biertan spoke about Biertan’s protection measures for the historic town-core.

After the contributions.the delegates of the member cities of the Region had a discussion about their experiences of managing the World Heritage area where each participating member city formed an opinion about this important topic. They agreed that the objectives of the conference were as follows:

The aim of the management plan pushed for by the World Heritage Centre of UNESCO is to see to it that World Heritage areas containing the common cultural heritage of humanity should preserve the most important values produced by continuous human activities during decades and millennia the same way as we have inherited it through a long series of generations.

Therefore any possible new development can be imagined only in the spirit of respecting the existing cultural values in these World Heritage areas so that the preservation of built heritage and the creation of new values should produce a harmonious balance.

The inhabitants of all the Member Cities of our Region have inherited cultural heritage of inestimable value from our ancestors which is the universal heritage of all of us beside those living there. And it is not becoming to waste away and live up heritage but our most important task is its preservation and enhancement. The future generations have the same right to take over these cultural treasures from us unharmed as we have taken them over as the result of value-producing and protecting work of the generations of our ancestors.

In addition to the preservation and enrichment of our built heritage it is our duty to teach the age group of our children and grandchildren to cherish the values inherited, and to awake their interest to absorb cultural experience already in childhood. This is the only way of hoping that once they would also properly hand over our universal heritage as it was done by their predecessors.

The series of children’s drawing competitions organised by Banská Štiavnica of our Region is worth mentioning which was held already for the 14th time in 2008. Viewing the carefully made, quality drawings we may have all our hopes that our world heritage will pass over to good hands when the children of today grow up.

In architectural and town-planning respects it would be proper to elaborate a case-study regarding the World Heritage area in each member city. These case-studies would be suitable to cast light on the conflicts of the preservation of the built heritage, the compatibility or insolvable contradictions. It would be useful if each member city presented such a case-study at the next conference.

In the evening the participants of the conference had the possibility to see the World Heritage panorama of Budapest by cruising along the River Danube.

On 11th September the conference continued with a day-trip to Komárom where the unique fortification system on both sides of the River Danube (the biggest one in Central Europe) is a candidate for the World Heritage title. The application to the UNESCO World Heritage Centre was submitted mutually by Hungary and Slovakia as a nice example of the cultural cooperation between two neighbouring countries. The conference guests visited the monumental complex of Fort Monostor and then the Klapka György Museum in Komárom which is famous for its wonderful wall paintings from the Roman period. In the evening a generous dinner was given in Pilisszentiván in honour of the guests.

On the morning of 12th September at the closing session of the Conference the delegates of the cities ceremonially signed the Seventh Budapest Document and the Memorial Certificate in the wonderful assembly hall of the City of Budapest. The farewell lunch given at the same venue finished this successful and pleasant meeting of the Region.

Budapest, Hungary
Dr. Gábor Demszky – mayor
Dr. Katalin Kiss – head of Department for the Protection of Settlement Heritage, coordinator of the Central and Eastern European Regional Secretariat of the OWHC. 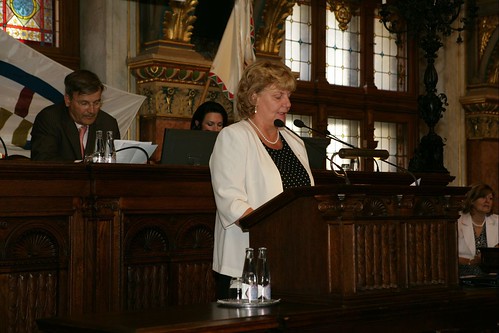 Dr. Katalin Kiss, coordinator of the Central and Eastern European Regional Secretariat on the pulpit. In the rear row from the left: dr. Gábor Demszky, mayor of Budapest and Lee Minaidis, interim secretary general of the Organization of World Heritage Cities 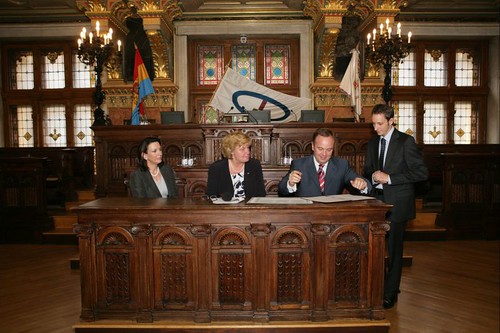 Valerij Shevchuk, chairman of the Moscow City Cultural Heritage Committee is signing the VII. Budapest Document with Dr. Katalin Kiss and Lee Minaidis on the left and András Csernyik (Budapest) on the right 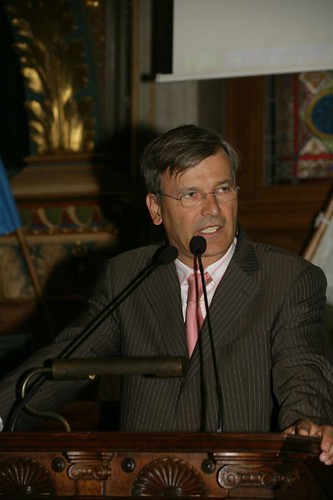 Dr. Gábor Demszky, mayor of Budapest in the assembly hall 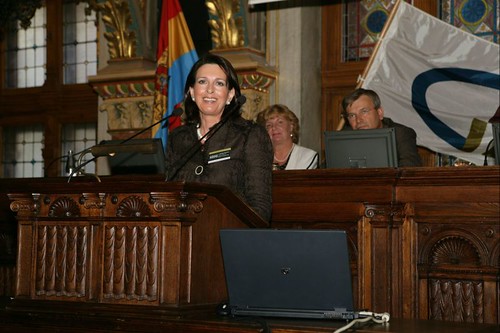 Lee Minaidis, interim secretary general of the OWHC on the pulpit. In the rear row from the left: Dr. Katalin Kiss, coordinator of the Central and Eastern European Regional Secretariat and Dr. Gábor Demszky, mayor of Budapest 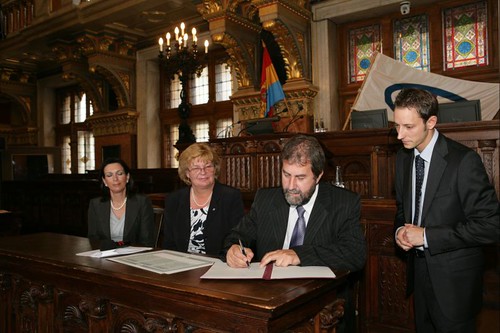 Ivo Šalátek, mayor of Kutná Hora is signing the VII. Budapest Document with Dr. Katalin Kiss and Lee Minaidis on the left and András Csernyik (Budapest) on the right 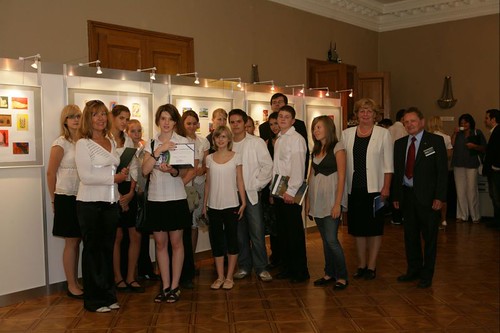 Group photo, Juhász Nóra with her award for winning second prize in the “World Heritage – a Youthful Vision 2008” children’s drawing competition, her teacher and class-mates from Városmajori Gimnázium, Budapest, on the right: Dr. Katalin Kiss and Miron Breznoščák (Banská Štiavnica) 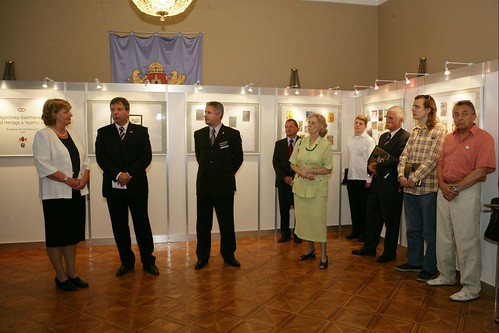 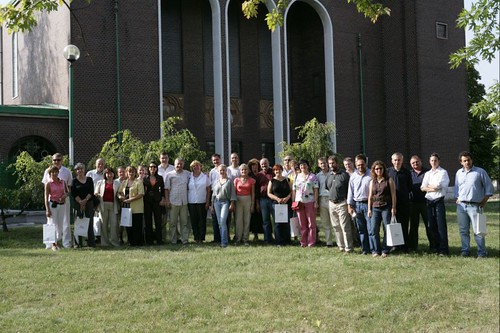 Group photo with the participants of the conference during the day-trip to Komárom. 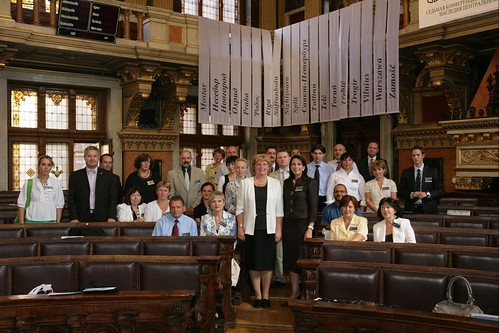 The participants of the conference during the closing session in the assembly hall of Budapest City with Dr. Katalin Kiss and Lee Minaidis in the middle.p>