The 16th World Congress of the OWHC

We would like to thank our partners for their financial support in making the conference a success!

The 16th World Congress of the Organization of World Heritage Cities (OWHC) was held in Québec City, Canada, from September 6 to 9, 2022. The theme of the Congress was “Enhancing Livability in World Heritage Cities.” The event mainly comprised the 25th General Assembly of the OWHC and the Symposium entitled Working together towards a new urban project. A summary of each day of the Congress is available on this page.

Results of the survey

You will find the complete list of participants by clicking ON THIS LINK.

The Congress day by day

The participants who had already arrived in Québec City were warmly received at city hall by the mayor, Bruno Marchand, for a welcome cocktail. It was an opportunity for many to reconnect, in person, with colleagues from around the world for the first time since the 2019 World Congress of the OWHC in Krakow. For others, it was a first contact with the OWHC and its members. The mayors of Québec City and Bordeaux highlighted the 60th anniversary of the Québec-Bordeaux twinning and the links created in the fields of social development, tourism, economy, culture, and knowledge for the benefit of citizens and their respective cities.

The pre-registered members participated in large numbers in the three site visits offered by the City of Québec, while at the same time the Board of Directors of the OWHC was meeting – the 55th board meeting was chaired by the Mayor of Cusco, Victor German Boluarte Medina.

Walking tour with historical overview of the evolution of the Québec City fortifications, a centrepiece of the historic district of Old Québec.

The Augustinian Monastery, a place of renewal

Completed in 2015, the Augustinian Monastery conversion project stemmed from the nuns’ desire to bequeath to the population of Québec their mission and values through their tangible and intangible heritage.

Important conventual and hospital complex developed as of the 17th century. A round table of different partners and experts highlighted the opportunities to find a new vocation for this important complex in the heart of a working class district. Presentation of the site, round table of experts, discussion period, and visit.

The official opening evening of the Congress took place at Théâtre Le Diamant. After the cocktail and the words of welcome addressed by the Mayor of Québec City and the Secretary General of the OWHC, Mikhaël de Thyse, the evening ended with the colourful show by the multidisciplinary artists of the “Machine de Cirque” troop. 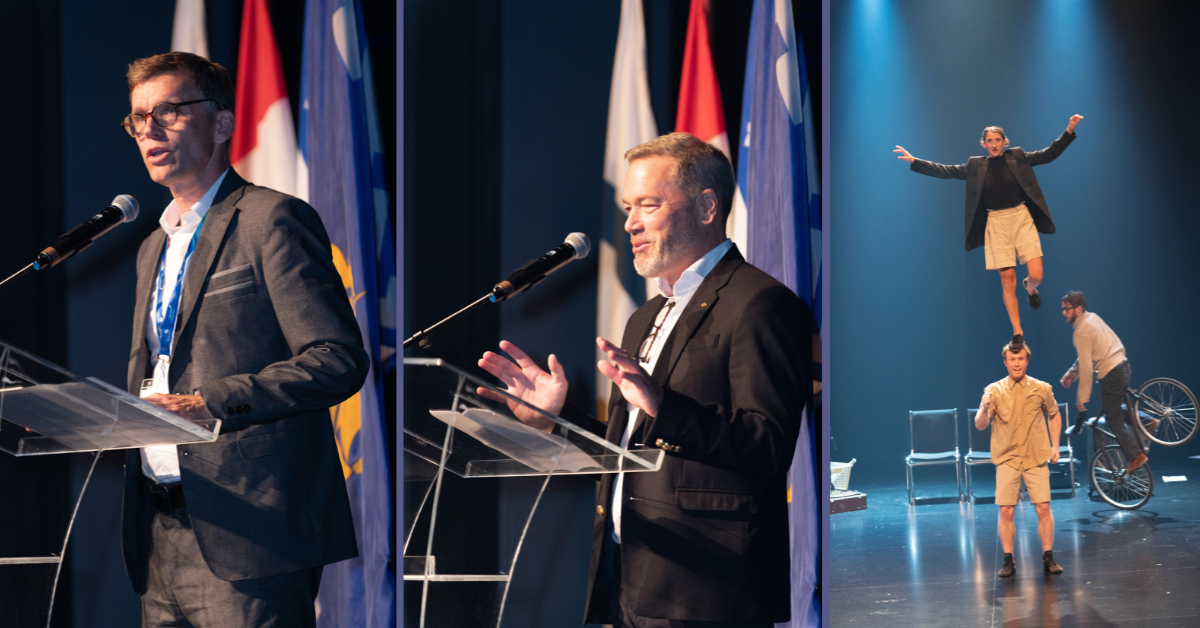 The day of September 7 was entirely dedicated to sessions 1 and 2 of the General Assembly.

During the morning (session 1), in addition to the adoption of resolutions on the current business of the OWHC (financial statement, president’s report, etc.), the session was dedicated to the presentations of candidacies for the 2022-2024 Board of Directors and the host city of the 2024 World Congress. Twelve (12) OWHC member cities in good standing put forward their candidacy for the Board. Only Cordoba (Spain) was a candidate to host the 17th World Congress in 2024 and was therefore elected by acclamation. 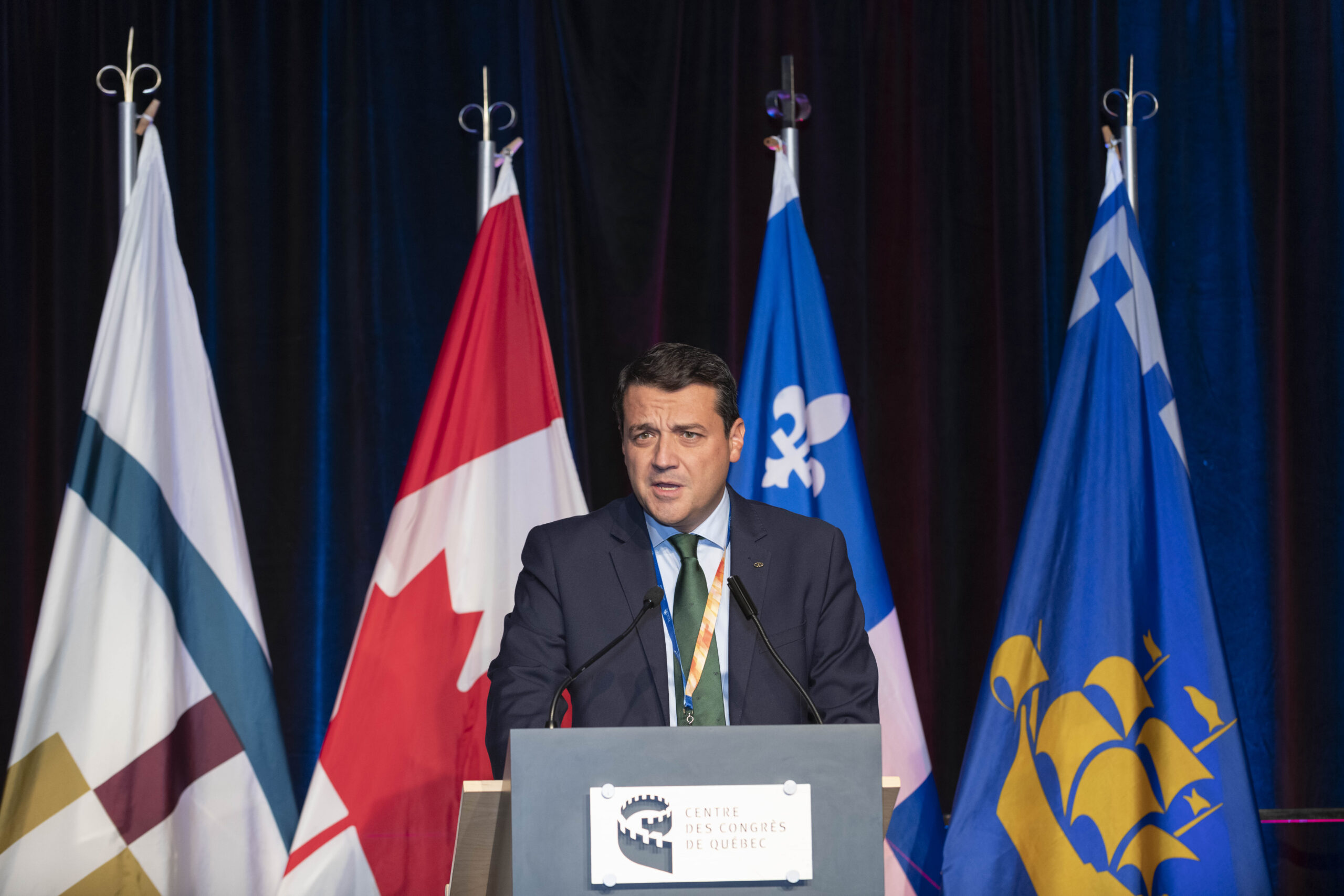 Presentation of the candidacy of Cordoba (Spain), by its mayor Mr. José María Bellido Roche

In the afternoon (session 2), a discussion by five (5) geographical regions enabled members to express their views on new cooperation and assistance programs for member cities. This open and participatory discussion highlighted the needs and opportunities that will help the General Secretariat to enrich the 2022-2024 Action Plan. In the second part of the session, members were able to participate in regional meetings.

A very spirited evening took place at the Québec Armoury, where OWHC members enjoyed an array of traditional Québec and Indigenous cultural performances thanks to the Centre de valorisation du patrimoine vivant Ès TRAD. To the lively rhythm of traditional musicians and singers, Congress participants joyfully hit the dance floor to close this first day of work. 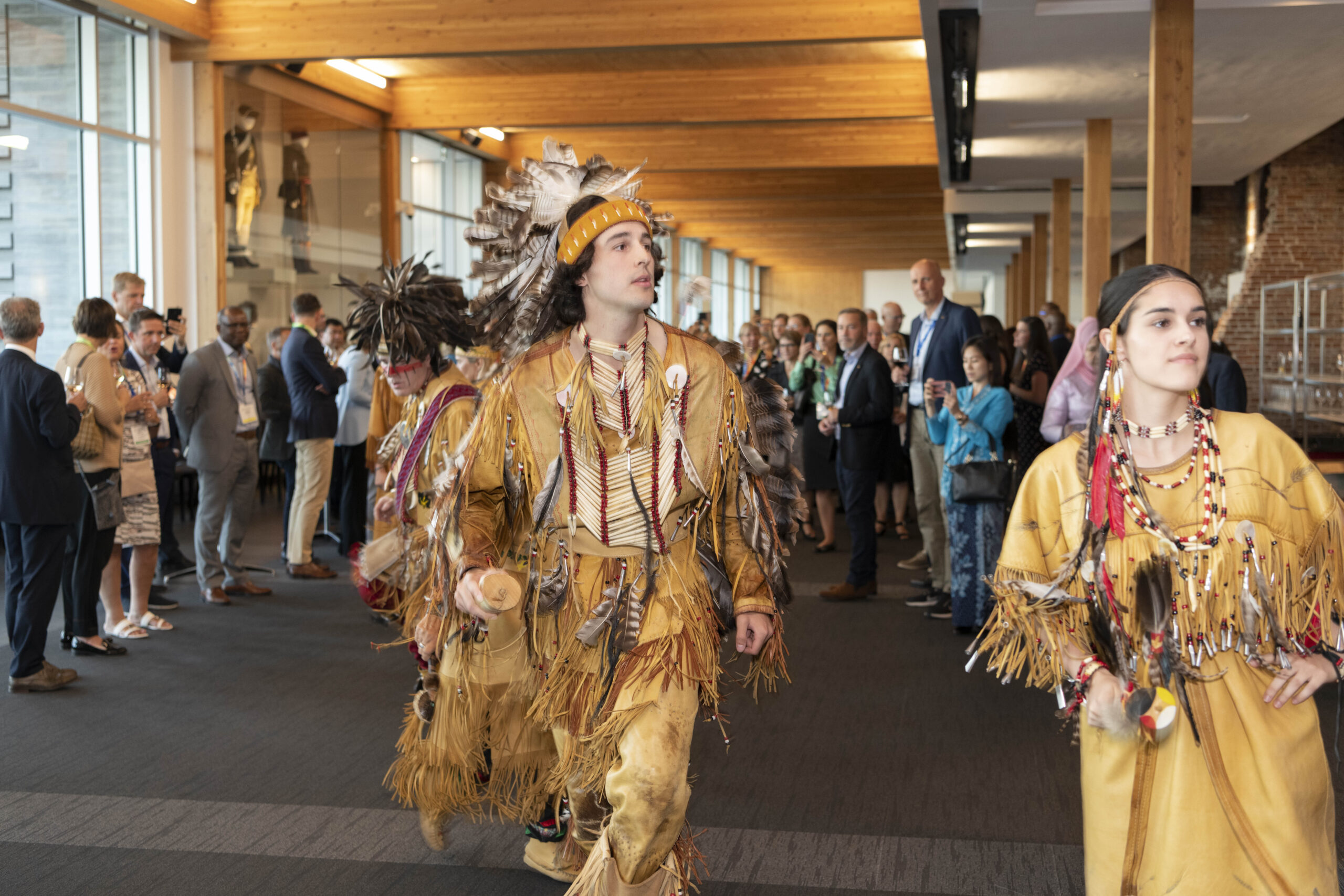 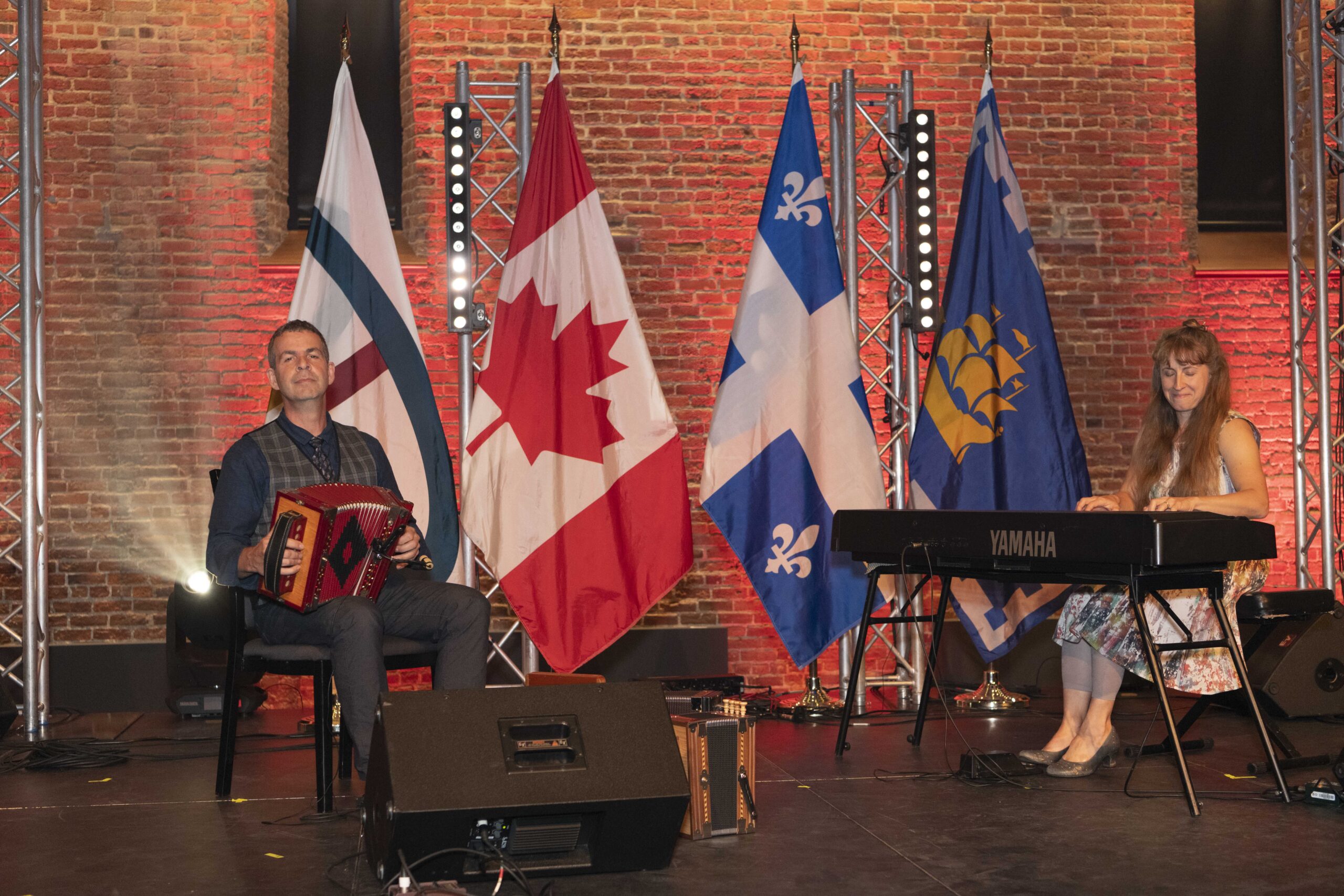 The day was entirely dedicated to the Symposium. Mayors and elected officials introduced and presented the different aspects that now constitute the political vision that will guide the OWHC in the coming years and whose objective is to draft a “New Urban Project” for the OWHC by 2024. This new heritage approach will make it possible, in the near future, to support cities in the implementation of sustainable urban policies based on the enhancement of their heritage. The political vision has been produced through a long preparation phase (“On the Road to Québec”) thanks to the involvement of more than 150 experts representing more than 60 member cities. From this irrefutable scientific and professional content came the three strategic axes and nine operational objectives that were discussed during the Symposium, for validation. 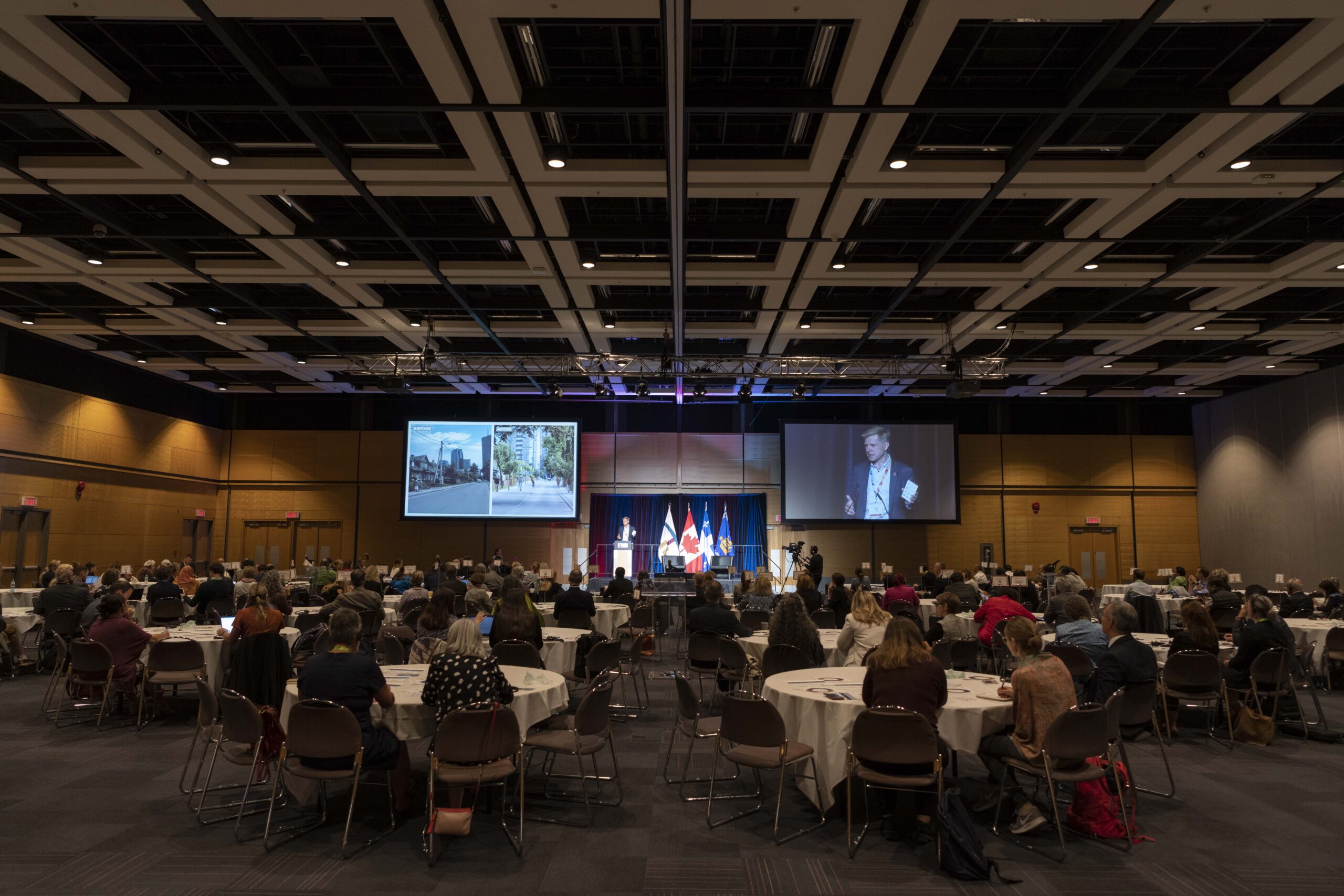 The first two sessions were organized in such a way as to discuss the axes and objectives, one after the other, with an introduction by a mayor or an elected official. After each intervention, the participants could express their views live during a period dedicated to the “Delegations’ input” or virtually through an online platform, guaranteeing the compilation of all contributions for subsequent processing. 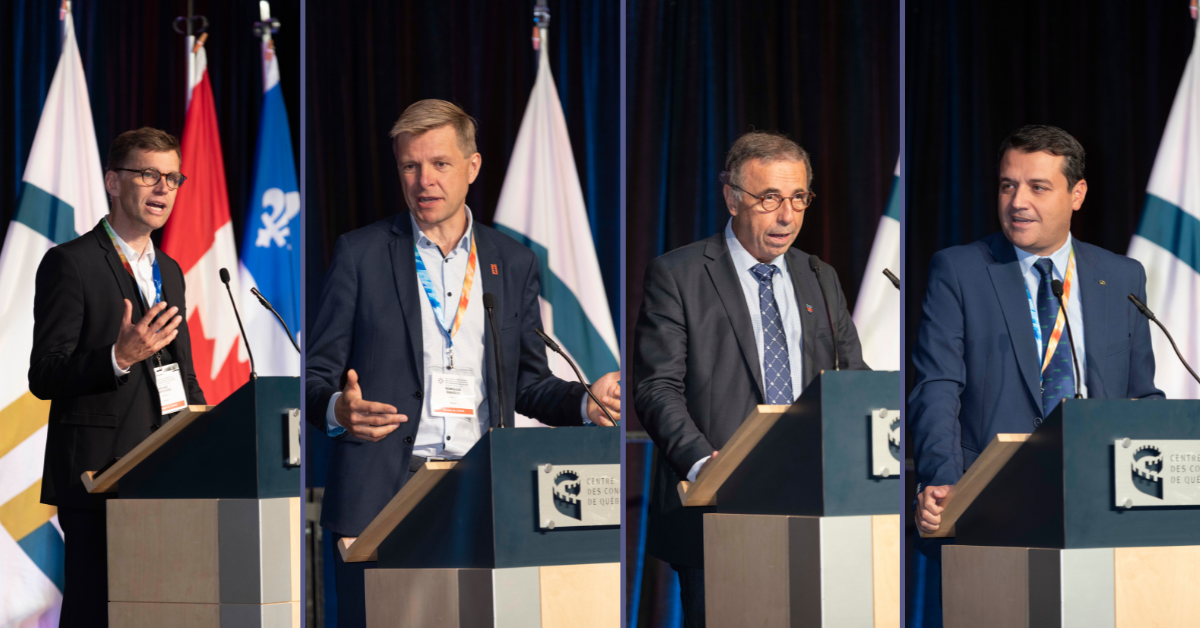 After the lunch break, during which the vote for the Board of Directors took place, the introduction by the Mayor of Le Havre, Édouard Philippe, launched the second session. The Mayor of Évora, Carlos Pinto de Sá, introduced the first three operational objectives (OO) – OO 1.1 Develop a holistic and shared knowledge of heritage resources; OO 1.2 Stimulate citizens’ sense of belonging and responsibility; OO 1.3 Enhancement of heritage capital and the creation of contemporary architecture. The Mayor of Dubrovnik, Mato Frankovic, introduced the following three objectives – OO 2.1 Strengthen habitability in historic centres; OO 2.2 Support the creation of activities that regenerate the city; OO 2.3 Requalification and decarbonation of public spaces. Finally, the Mayor of Tunis, Souad Abderrahim, introduced the last three operational objectives – OO 3.1 Create a permanent dialogue between all stakeholders; OO 3.2 Co-construction and co-management of urban projects; OO 3.3 Use the local territory intelligence for public urban management practices.

The mayors and elected officials put into perspective the strategic aspects and political considerations inspired by the challenges faced by the member cities, illustrating them with concrete cases, real-life experiences, and objectives to be achieved. These challenges, arising from multiple crises accelerated if not triggered by the effects of climate change, are common to all OWHC members, although they are expressed differently from one city to another. 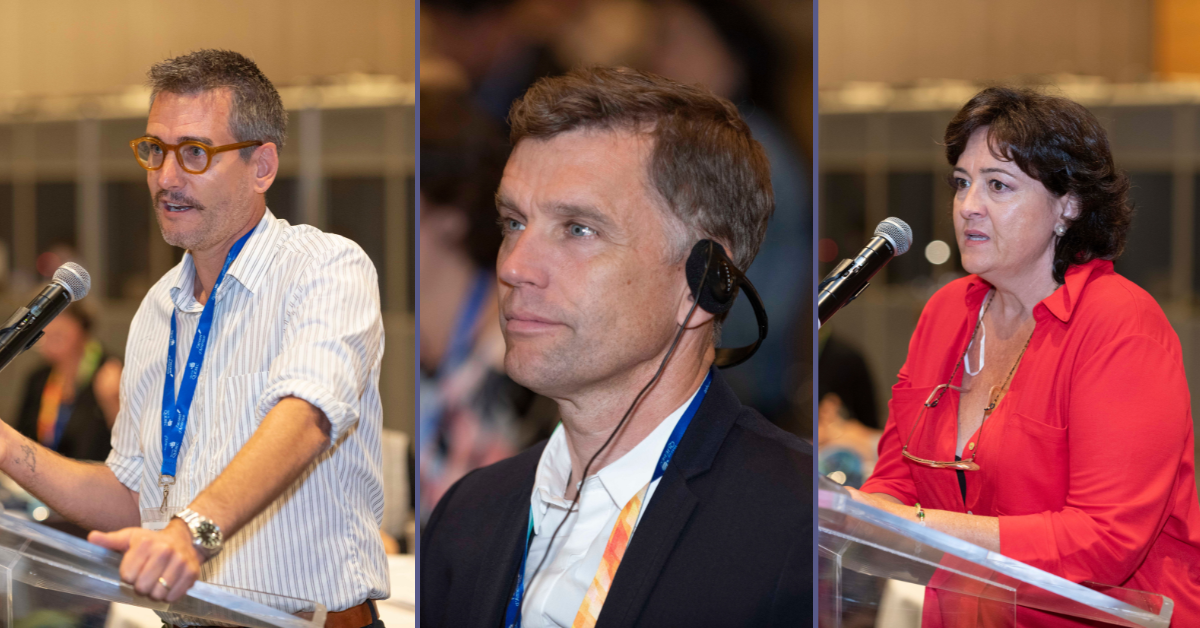 During their numerous interventions, the delegations naturally pushed the discussion in the direction of concrete actions through which cities can and must address the challenges that they face. In addition to these testimonies, nearly 200 virtual contributions were put forward. All contributions will be carefully processed, as they identify an initial series of priority actions around which member cities can develop cooperation initiatives and which will structure the process to be implemented.

Invited to the Musée national des Beaux-Arts du Québec, the participants enjoyed a sunny start to the evening on the museum’s terrace, with access to the Inuit Art Room – Brousseau Collection. During the evening, the Secretary General took the opportunity to underline the Solidarity Day of World Heritage Cities by inviting all the cities of the OWHC network to remember the important responsibility to protect and promote their cities’ heritage. The president of the election, Victor German Boluarte Medina, Mayor of Cusco, declared elected the eight members of the Board of Directors. In accordance with the rules of the organization, in a democratic exercise that can only strengthen the OWHC, the Mayor of Québec City, Bruno Marchand, was elected by acclamation as President of the OWHC for 2022-2024. The complete list of Board members can be consulted by CLICKING HERE. 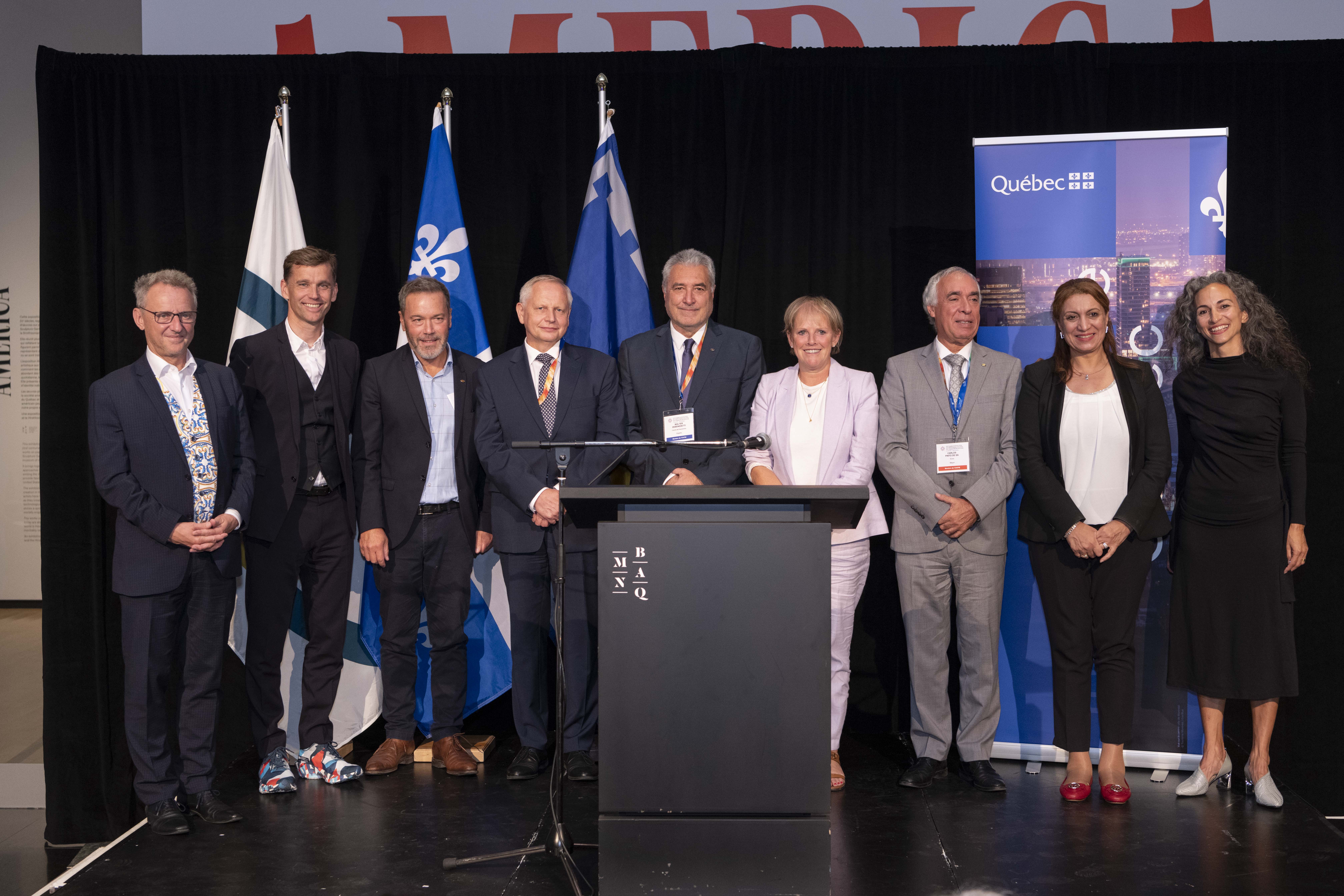 During the morning, the third and last session of the Symposium helped to familiarize participants with the Roadmap proposed by the General Secretariat. The session was introduced by the mayors of Cusco, Victor German Boluarte Medina, and Xochimilco, José Carlos Acosta Ruiz, and the contributions of the delegations gave clear support to this novel cooperation experiment and confirmed the willingness of the member cities to engage in the process.

To close the Symposium, the Mayor of Québec City presented the mandate given to the General Secretariat and obtained the agreement of the participants. The validated operational framework, now referred to as the Québec Roadmap, will be detailed in the form of an action plan. It will be implemented before the end of 2022 and will lead OWHC member cities on the path of the “New Urban Project” which should be adopted at the next Congress in Cordoba. 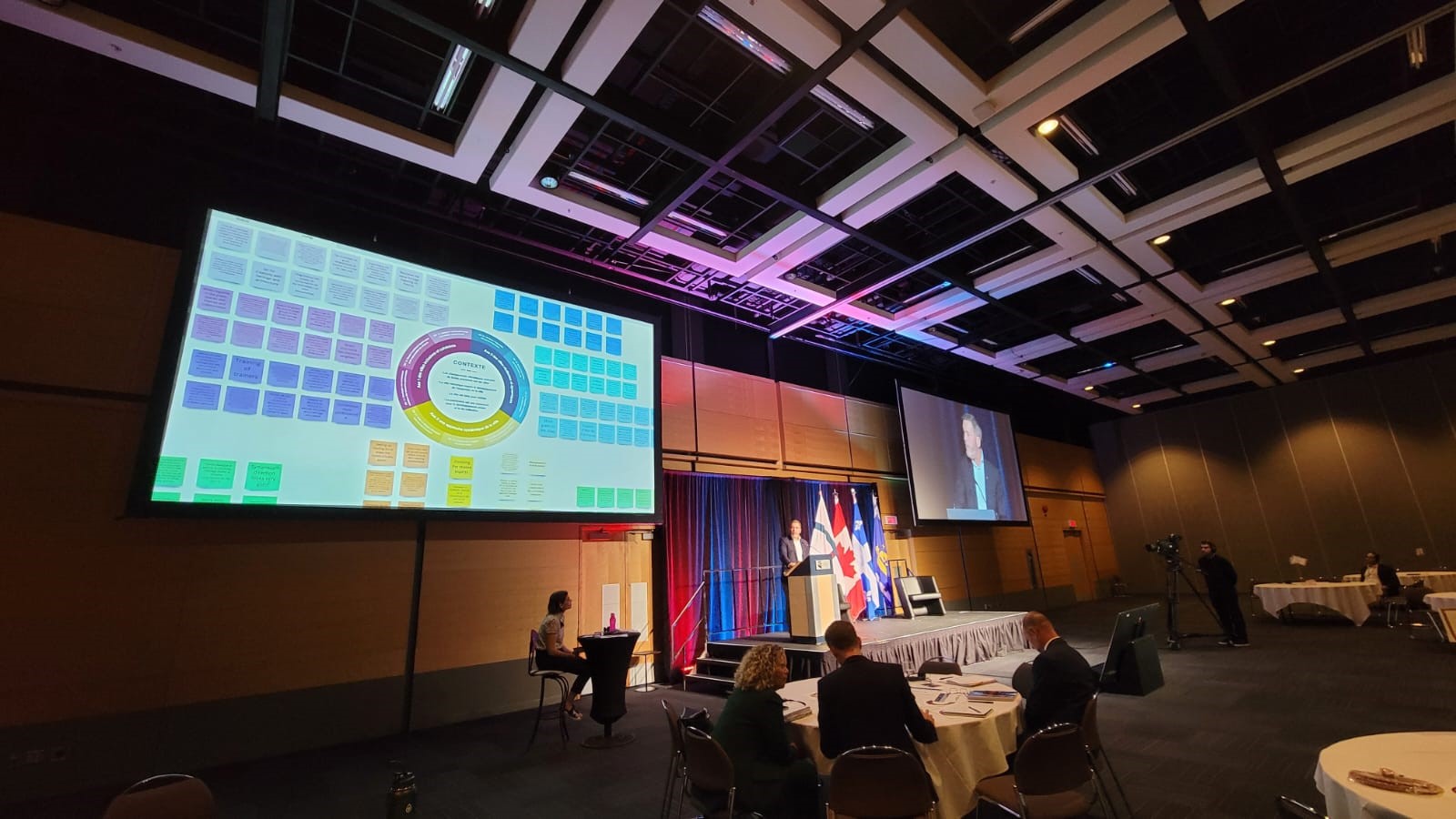 The 16th World Congress ended on a note of general satisfaction and the feeling that the event had succeeded in strengthening the links between member cities and their desire to carry out projects of collective scope, capable of transforming their urban environment and responding appropriately to the multiple challenges of our era. It was with a sense of accomplishment that the members gathered one last time for an informal evening, hosted by the Secretary General of the OWHC. 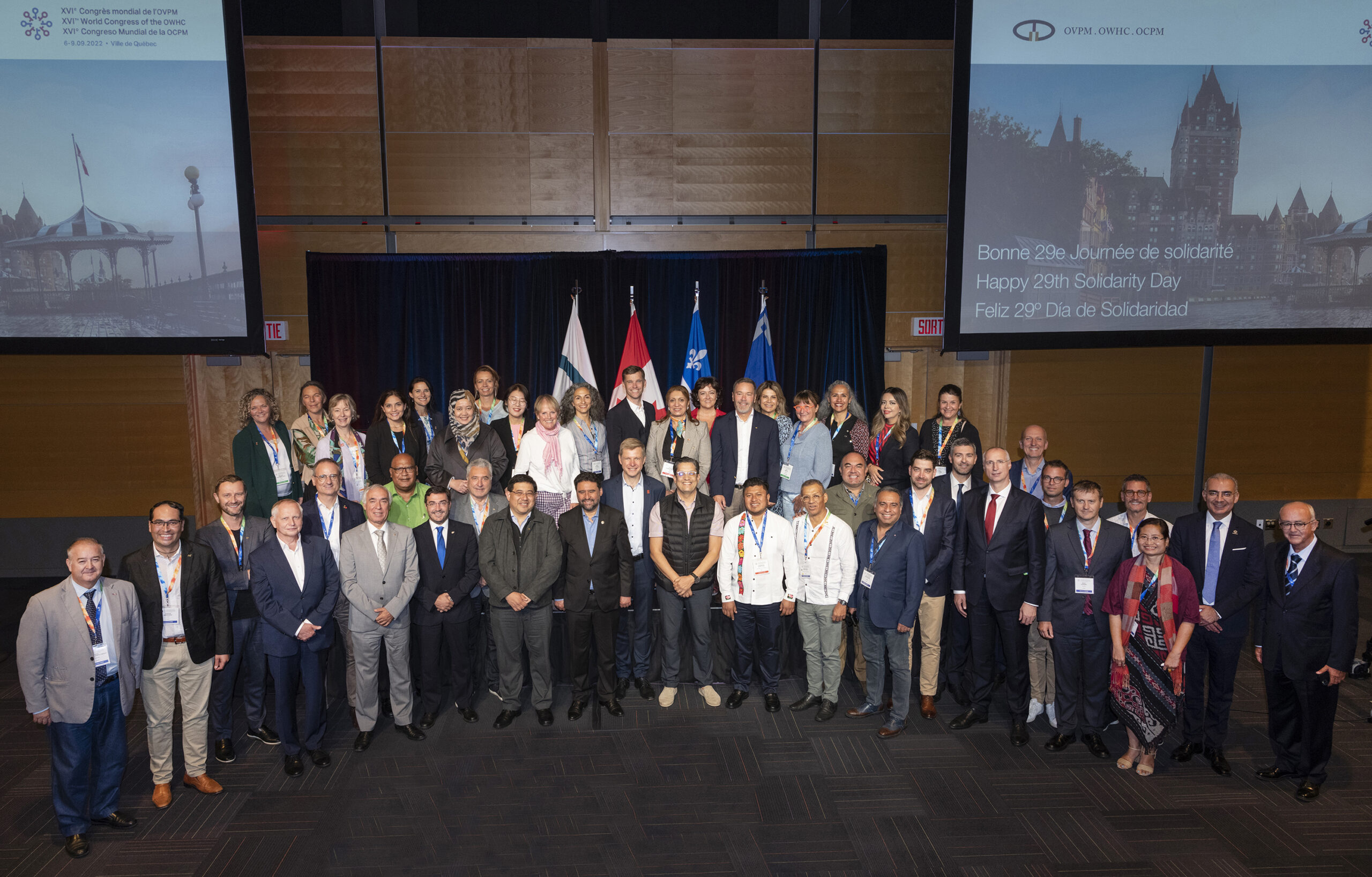 The congress in pictures!

To view all photos from the 16th World Congress, follow the link below and select your photo folder by day.