In north central Germany, at the edge of the Harz massif, Quedlinburg was constructed on the Bode River; the site also includes two overhanging hills.

Moats follow the irregular contours of the fortification wall, which has been partially preserved. Narrow, tortuous lanes in the old part of the city, which dates to the 10th century, and a uniform plan in its newer part, constructed in the 12th century, make up the medieval layout. The centre of the old city is near the main square, known as the “Markt.” The hill on which the castle is built, with the buildings that surround it, make up the original nucleus of the city.

Monuments of Romanesque, Gothic, Renaissance and Baroque styling are sprinkled throughout the architectural landscape. The Saint Servatius Collegiate Church, constructed between the 10th and 12th centuries, constitutes an important work. Numerous half-timber houses dating from the 15th to the 17th centuries, often very elaborate, follow the city’s curved streets and border its squares.

Criterion (iv): Quedlinburg is an outstanding example of a European town with medieval foundations, which has preserved a high proportion of timber-framed buildings of exceptional quality.

Quedlinburg publishes its “Cry-Out for Help” in English

Regional Conference of North-West Europe at13/14 November in Quedlinburg 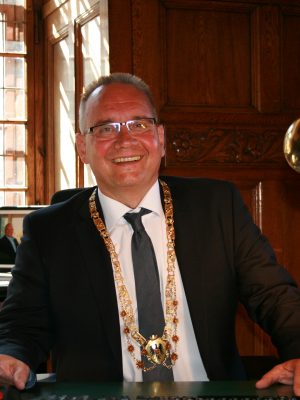 Head of City Restoration and Development
Municipality of Quedlinburg